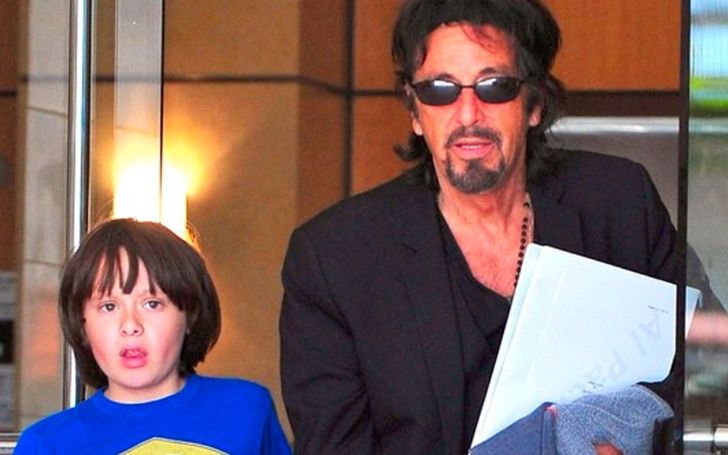 Learn all the details you need to know about the son Anton James Pacino of the famous actor Al Pacino.

Al Pacino’s a widely-recognized name in the entertainment industry. As an immensely successful actor, even an Academy Award, two Tony Awards, and two Primetime Emmy Awards are not enough to properly give justice to his career achievements. He’s accomplished far more than any number of awards or honors can suffice, as evident from his works over the years.

While Al Pacino’s professional achievements mainly get major attention, media often get a few opportunities to slip into his personal life. His son Anton James Pacino is getting recognition lately, and many people seem interested to learn about him. So we compiled some details on him, so you get to know him better.

Anton James Pacino was welcomed by Al Pacino and his now ex-girlfriend and well-known actress Beverly D’Angelo in 2001. Anton is one of the fraternal twins of the actor, his twin sister Olivia Rose Pacino being another one. Al Pacino and Beverly dated from 1996 until 2003.

Beverly and Al Pacino welcomed the twins at a much older age. Beverly was 49 years old when she gave birth to the twins. And Al Pacino was well in his sixties during the birth. Along with the twins, the actor also has a daughter, Julie Marie Pacino, born in 1989.

Also See: Learn about the Net Worth, Career Details and Biography of Debraca Denise

After Al Pacino and Beverly D’Angelo separated, they battled for the custody of the twins. ‘The Godfather’ actor filed a lawsuit in the family court seeking joint custody and liberal visitation rights from Beverly, the mother. He gets to spend a significant amount of time with his children despite not having full custody of his children.

Al Pacino felt a whole new level of challenges coming his way after the birth of his twin kids. In fact, the arrival of his children changed his life forever and brought huge changes in his professional and personal lives.

‘Kids changed my perspective,’ Al Pacino told The Guardian in 2015. ‘Before I had my three, I’d walk around in my own head, not noticing anything. Acting used to be everything; now, because of them, it’s just a small part.’

Being a celebrity parent comes with its own set of difficulties. Children of prominent people do not get to lead a normal life. Every event and action they are part of comes under the scrutiny of the public and media. And Al Pacino and his twin children, Anton James Pacino and Olivia Pacino, also face those challenges.

‘I haven’t been in a subway or grocery store in years,’ Al Pacino says. ‘It’s hard for my children to go out publicly with me.’

Check Out: Find Out the Details of the Age, Wiki, Bio, Net Worth and Personal Life of Ali Landry