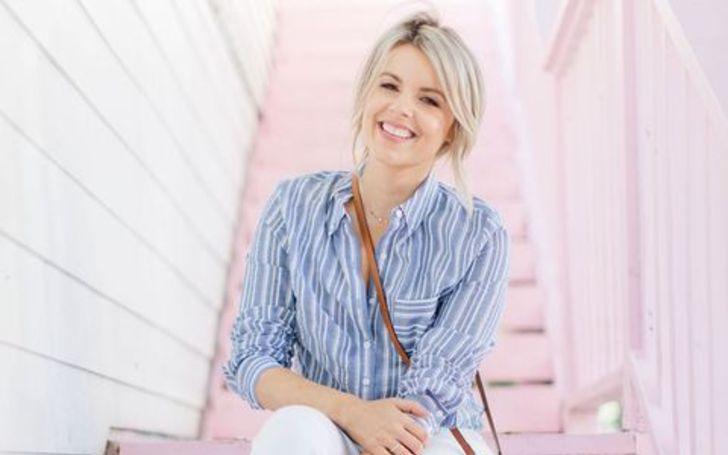 Who is Ali Fedotowsky? Well, she is a television personality who rose to prominence from her presence on the ABC reality shows The Bachelor: On the Wings of Love and season six of Bachelorette. Besides, appearing as a cast member, she made her way to television as a host and correspondent. Further, her successful married life also helped her to gain tons of attention. Let’s know more about her on this page.

Talking about Ali Fedotowsky’s financial status, she has garnered an impressive net worth of $700,000, as of 2020. Indeed, she holds an outstanding six-digit fortune, and all credit goes to her years of hard work she placed to manifest a successful career.

Fedotowsky began her professional journey with Quantum Learning Network, where she worked as a team leader in 2005. She stayed there for a year and left in 2006, as per her LinkedIn profile.

After then, Fedotowsky started to work for Pacific Consulting Group. Yeah, she was in a consulting business and operated as a senior communication associate. She gave two years of her career to that firm. Subsequently, in 2009, she began to work for Facebook. There she served as an inline sales operations account manager.

While Fedotowsky was working for Facebook, she also auditioned for her first reality show, The Bachelor: On the Wings of Love. She successfully made her way into the show. There she was contending for the love of pilot Jake Pavelka. Unfortunately, she had to leave the competition due to her duty call from Facebook.

Yes, Fedotowsky was confronted with an ultimatum from her employer, Facebook, to decide, either return to work or quit it. Though she couldn’t complete her first reality show, she made a comeback as the star of The Bachelorette.

As a journalist, currently, she is active as a host at NBC. Prior to that, she worked for local Fox News station as a weekly morning show correspondent. Further, she also served as a reporter for E! News. We can also see her at Home and Family, which is a morning talk show.

In addition, we can find Fedotowsky in her fashion and mommy blog, Ali Manno. Speaking of fashion, she was on the live judging panel for Miss USA 2012.

Regarding the relationship history besides her current husband, there aren’t many details made out to the media. However, the one which made its way through is her love life with Robert Martinez. The duo was engaged on the final episode of Bachelorette. Unluckily, their relationship only survived for a year; thus, before walking down the wedding aisle, they were separated.

Though Fedotowsky’s martial journey ended before it even started for the first time, she gave another chance to marriage, this time with her then-boyfriend Kevin Manno. They began to date in 2013, and soon after that, in 2015, they declared they were engaged.

Finally, on March 3, 2017, Fedotowsky and her beau, Manno, shared their marital vows. However, before their wedding, they were already parents to their first child, a baby girl, Molly. She was born on July 6, 2016. They welcomed their second kid, a baby boy, Riley, on May 24, 2018.

Sadly, Fedotowsky-Manno couple couldn’t give birth to their third baby who was growing in Ali’s womb due to miscarriage. She shared her pain of losing the infant on her Instagram post, which was also pointed out by Today.