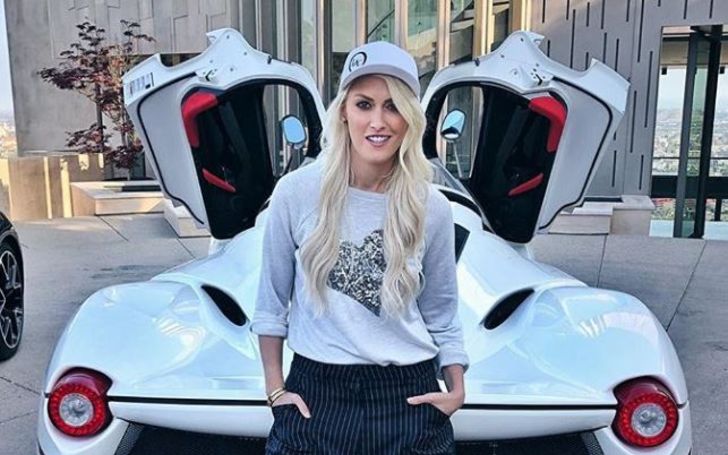 Alexandra Mary Hirschi or better yet Supercar Blondie is a famous Australian social media personality who’s gone viral for her luxurious car vlogs. She’s been contacted by the world’s most luxurious car brands to test and review their products. Some of the most famous ones are Ferrari 488 GTB, the 488 Spider, the Mclaren 570s and 540c, the Bentley GT3R, GT Speed, and V8s, Mercedes AMG GTs, Lamborghini Huracan, and many more. So, how does she afford it, what’s her net worth? These are all the queries that we’re going to solve down below.

Alexandra Mary Hirschi is known to be the fastest-growing media presence on the internet. It’s not a suprise when you’re driving the world’s most luxurious cars out there. Currently, she enjoys 6.6 million followers on Instagram, 4 million subscribers on YouTube channel. All these ensure that she’s surely gained success not only professionally but also financially.

As of now, there are no documents or articles that show her exact net worth collection; however, sources speculate that the numbers are a smashing $15 million as of 2020. She earns a handsome amount through her social media accounts which have millions of followers.

Hirschi also enjoys a collection of luxurious cars for herself which are an Ashton Martin that costs around $297,775, Lamborghini Huracan $203,000, Ferrari $470,000. Due to her ever-evolving interests, she doesn’t keep her cars for much longer and she recently sold her Huracan and purchased the regal Rolls Royce Wratih worth $330,000 and a McLaren 720S Supercar.

Alexandra Mary Hirschi’s Husband who is Also Her Manager

Many fans appear to be genuinely interested on whether Alexandra Mary Hirschi is committed or in a relationship. Well, the supercar blondie is no longer single. In fact, she’s married to the love of her life Nik Hirschi.

There aren’t many details about the couple on the internet but we do know that he’s very supportive of his wife’s business which is why he doubles as her manager. Although unlike his wife, Nik prefers to be kept in the shadow and isn’t interested in fame. For now, the couple enjoys their career in Dubai and don’t share any children.

Alexandra Mary Hirschi started her career through her social media back in early 2016 just for fun, but slowly as her followers started to grow, she became serious to pursue her career in it. Before that, she worked as a journalist while presenting and news reading a radio show on Dubai Eye 103.5 for a total of 9 years. Before leaving her job as a RJ she used to interview celebs like John Travolta, Jake Gyllenhaal, Liam Neeson, and many more.

The 34-year-old became a full-time social influencer on 2018 and since then has promoted brands like Bugatti, Ferrari, Lamborghini, BMW, and many more. Through her videos, she promotes supercars while providing her views on the demographics of the cars. In 2018, Arabian Business listed her in the list of top 50 Influential Women in The Arab World. She was also named as the Influencer of the Year by Esquire Magazine Middle East.

Also See: All To Know About NFL Star George Kittle’s Wife Claire Till

Besides appearing on her own social media channels, she’s also appeared on Germany’s free to air car show GRIP Das Automagazin. In 2019 she also hosted her own show Car Crews on Broadcasting & Cable where she discovers the car culture in the United States.