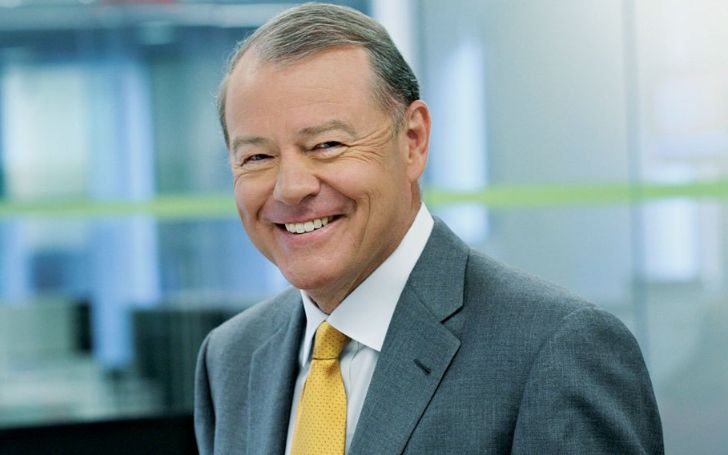 If you follow the news, then you might be familiar with the face of Stuart Varney, the reputed English-American talk show host, and a political commentator. In fact, he is a household name for Fox News and Fox Business Network as he contributes with his knowledge in politics and business. Journalism is a challenging thing as there is immense pressure to report things as they are, but the 70-year-old finds a way to do it with ease. So, today we take you close to the personal life, love life, and net worth details of Stuart Varney.

The English-American journalist Stuart Varney began journalism from 1980 and has been continuously burning the midnight oil for years to earn a name for himself. Besides the title, he also amassed a colossal fortune. Specifically, Varney accumulates a whopping net worth of $10 million as of 2020. The primary source of his enormous bank balance is his numerous affiliation and contribution to several networks like CNN and Fox to the current date. As per estimates, he earns around $75,000 per year, which is the average salary of a Fox News Anchor.

Previously, Varney started out as a reporter at KEMO-TV before switching to the Manhattan bureau of CNN in June 1980. Interestingly, he pushed the ranks pretty quickly, hosting shows like Business Day, Business Asia, and Moneyline with Willow Bay. However, he decided to switch to CNBC’s ‘Wall Street Journal Editorial Board with Stuart Varney’ in 2001. Similarly, his journey at Fox News began in January 2004 when he signed with the business team. Later, he joined the Fox Business Network when it launched in October 2007.

Also See: Grab all the details about Mika Brzezinski’s net worth and career.

Varney currently co-hosts ‘Varney & Co’ on the FBN that airs from 9 AM to 12 PM ET every weekday. Furthermore, he is also the regular panel member on FBN’s show ‘Cashin’ In.’

While Stuart Varney’s professional life is nothing but resounding, the case is completely different from his married life. The English-American journalist is a divorcee as of now, but he used to be married for more than two decades to ex-wife Deborah Varney. While he never disclosed much about his love story with ex-wife, we do know that the love birds tied the knot in 1993.

Varney and his ex-wife Deborah Varney shared three children together and lived in Franklin Lakes, New Jersey, while they were together. Just when everything looked more than perfect, his then-wife shocked everyone by filing a divorce complaint on October 29, 2014. According to the papers, Varney was in a nine-year adulterous affair with a woman from Orlando, Florida, which triggered the divorce.

Fox Business Network’s journalist Stuart Varney was born in Derby, Derbyshire, England, on July 7, 1948. Although he is secretive about his family background, we do know that he completed his graduation from the London School of Economics. Surprisingly, he spent a year working in Nairobi, Kenya, after secondary school.

Varney initially started his career in radio before going on television in KEMO-TV. A significant change in his life occurred in November 2015, when he became an American citizen. In August 2019, he defended President Donald Trump on how he never lied to the American public in conversation with Republican presidential candidate Joe Walsh on Varney & Co.