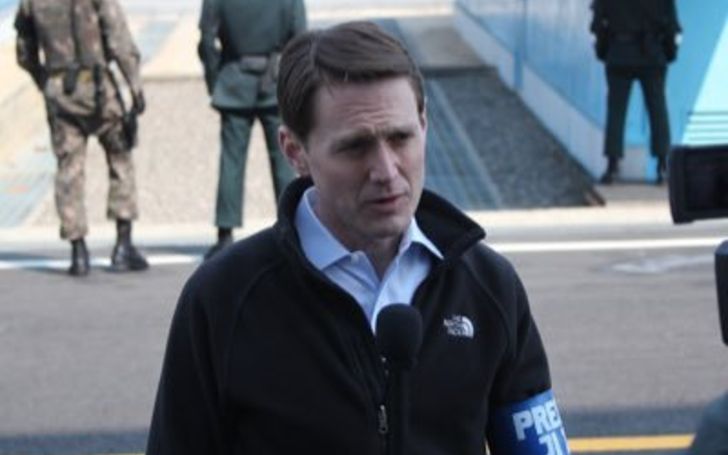 FOX News Washington, D.C. correspondent Rich Edson has been in the news reporting area for almost twenty years. During this time, he’s worked with some of the well-known news channels likes WJCL-TV, 2 News, and FOX Business Network. Learn all about this hard-working journalist as we look into the things of his private and professional life!

Rich Edson’s is Living A Married Life; Who is His Wife?

Rich Edson is relishing a blissful married life with his wife, Cheryl Cappiello. His spouse Cheryl is a New York University and Boston University law graduate and was a former associate at the Roseland, New Jersey, law firm Lowenstein Sandler.

The duo walked down the aisle in the presence of their family and close ones on July 19, 2008. The wedding took place at Our Lady of Mount Carmel Church in Tenafly, New Jersey, performed by a Roman Catholic priest Rev. Lenoard J. Gilman.

Since that day onward, the former WJCL reporter has been in an everlasting bond with his other half. However, even after almost twelve years into their marriage, the couple do not seem to have any children yet. The primary reason might be due to their busy personal life.

The man prefers keeping a low-profile about his relationship status and does not post anything related to his private life on social media.

Often remaining busy with his job, Rich likes to relish his spare time with his close ones and travels to various places. He is currently living in Washington, D.C., with his family.

Rich Edson has a net worth of $3 million from his many years of career in the journalism field. By contrast, FOX Business Network business correspondent Susan Li holds a net worth of $2 million.

In his almost two decades in the industry as a journalist, he’s worked in several news companies serving in different positions. He was a sports reporter and anchor and general assignments at 2 News for two years from 2004 to 2006. After that, he worked at FOX 28 affiliated WJCL-TV, where he covered city and county governments.

Check out the clip of Rich Edson reporting news!

In October 2007, he joined FOX Business Network as its Washington Correspondent, where he stayed for eight years. In 2015, he became a member of FOX News Channel becoming its Washington DC-based correspondent.

While studying at Rutgers, the 38-year-old interned at Saturday Night Live for a year from 2001 to 2002. In 2010, he won Washington D.C.’s Funniest Journalist standup comedy competition.

While at FOX, he has covered news of the election, the U.S. debt ceiling crises of 2013 and 2011. Most recently, he is covering the dispute between China and India due to border disputes.