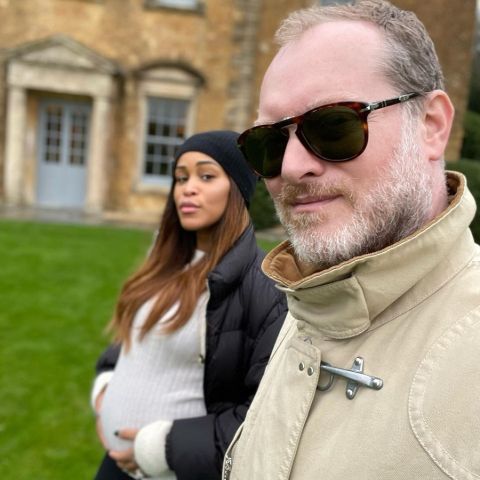 Eve is excited to meet her new baby. The 43-year-old pregnant rapper tagged her husband Maximillion Cooper in an Instagram picture of herself dressed in black as she clutched her baby bump on Monday. “Can’t believe how soon I’m going to meet this little person,” she captioned the photo while Cooper also commented on the post.

Brandy, RHOA star Marlo Hampton, and Eve’s Queens costar Nadine Velazquez were among the celebrities who left nice thoughts for Eve in the comments. “I am so thrilled for you @therealeve, there is nothing like it,” Naomi Campbell added.

The rapper later replied to a fan who inquired when she would announce the gender of her child, saying, “very soon hehe.” Eve offered her fans a sneak peek at the baby shower her loved ones arranged for her back in October last month. The musician was joined by her husband, Julia Wilch-Jeffers, costars Naturi Naughton and Nadine Velazquez, and friends and family for the occasion.

Moreover, Eve wore a silk burgundy dress and smiled in photographs posted to Instagram while cradling her baby bump. “Thank you, @ejlefton, for the most fantastic day!!! #babyshower in October Thank you so much to all of you women for making me feel so special!!! For weeks, I’ve been meaning to upload these!!! The first photo is of my mother and me, “she wrote in the caption.

Eve and Cooper announced in November that they are expecting their first child together in February. The “Who’s That Girl?” singer posted the good news alongside photographs of herself sporting an all-black ensemble while cuddling her baby bump. “@mrgumball3000, can you believe it? Finally, we get to tell everyone!!! We’ve all been waiting for this blessing for a long time!!! In February 2022, we will greet our little person “Eve added a caption to her Instagram image.

Cooper, 49, captioned the same photos on his Facebook page, “Very thrilled to share this news… we have a wee human on the way!” Eve married the British entrepreneur in June 2014 after four years of dating, and she is the stepmother of Cooper’s four teenage children from his previous marriage, Lotus, 19, Jagger, 17, Cash, 15, and Mini 13.