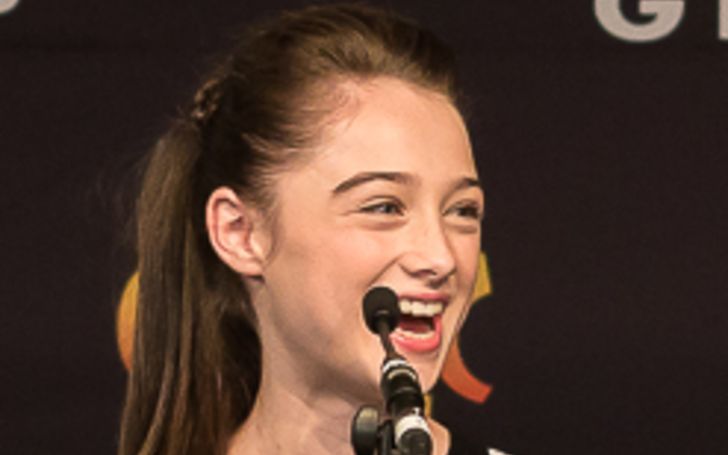 Born on November 12, 2001, Raffey Camomile Cassidy is a young English actress. She is only 18-years-old and has already appeared in several movies and series. Yes, you read it right, she has worked in different projects. Her journey in the show biz as an actress began back in 2009. Since then, she is watering her acting career. We will share more on her; thus, to learn it all, stay tuned till the end.

The young British star Raffey Cassidy hasn’t shared anything on her financial activities. Due to this, the media person failed to track down her actual net worth.

But there is some estimation running on the internet about her financial status; however, it’s important to first learn about her professional life.

Cassidy, 18, began her professional journey from a movie, Spanish Flu: The Forgotten Fallen in 2009. In that drama, she showed up as Ellen. Then in 2011, she got cast as Nora in a TV series 32 Brinkburn.

With a progressive rate, Cassidy started making more appearances in different projects. In 2012, she did two movies and one series, including Snow White and The Huntsman (as Young Snow White), Dark Shadows (as Young Angelique), and Mr Selfridge (as Beatrice Selfridge).

As her works began to get noticed, and she was offered to play numerous roles in different movies and television shows. Until this day, she has appeared in the dramas like The Killing of a Sacred Deer (as Kim Murphy), Tomorrowland (as Athena), and The Other Lamb (as Selah).

Cassidy is pretty famous for her act in Tomorrowland. That film became financially successful, grossing $93.4 million in North America and $115.7 million in other territories worldwide. Indeed, as a whole, the movie generated a magnificent amount of greens of $209.2 million, against a budget of $190 million.

As of 2020, Cassidy was in a short film Nightwalk. Further, she’s working on Kensuke’s Kingdom and The Brutalist.

Coming to Cassidy’s earnings with successful records and a bright future ahead of her, it’s believed she holds an impressive net worth of $1 million, as of 2020.

The Tomorrowland star Raffey Cassidy was born in Salford, England, to her parents. Her dad teaches acting, as noted by Information Cradle. Unfortunately, there are no details on her mother.

Regarding her siblings, the 5 ft 5 in beauty has a sister, Grace Cassidy, also an actress. Similarly, she has a brother, Finney Cassidy, who is also an actor.

Where is Raffey Cassidy from?

How old was Raffey Cassidy in Tomorrowland?

Back then while playing in Tomorrowland Raffey was only 11-years-old.

When was Raffey Cassidy born?