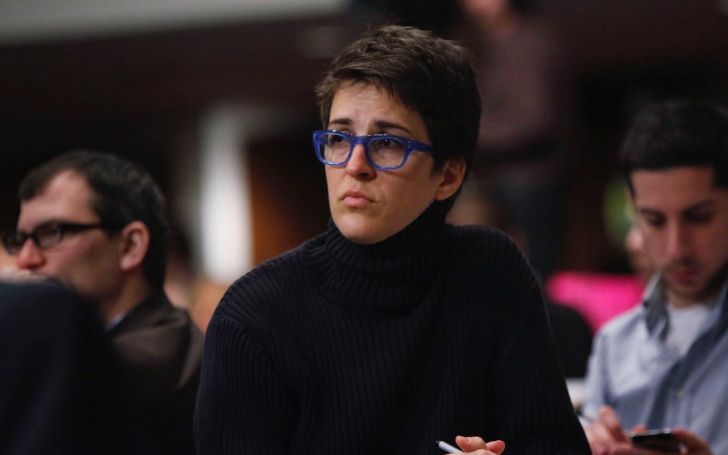 If you follow the American news and politics, then you might be familiar with the face of Rachel Maddow, the liberal political commentator. Her introduction would be quite incomplete without mentioning how she has her own show titled ‘The Rachel Maddow Show,’ a nightly television show on MSNBC. The 47-year-old is the perfect example of an empowered woman who burnt the midnight oil for decades to name herself. Today, we take you close to the net worth, career, and personal life details of the charming journalist.

When it comes to finances, Rachel Maddow has nothing to worry about considering her extensive experience and a stable job as a host of The Rachel Maddow Show. Specifically, she owns a staggering net worth of $20 million as of 2020. With age by her favor, she has a lot of good years to offer, which means that her bank balance is bound to grow in the near future. Regarding her salary, she makes a colossal sum of $7 million per year for her services in MSNBC as a news program host and political commentator.

Rachel Maddow’s journey to the top is nothing but inspiring considering how her first job was as a radio host in WRNX in 1999. Later, she also hosted her own two-hour program called The Rachel Maddow Show in March 2008. Likewise, her television journey began in June 2005, when she became a regular panelist on the MSNBC show, Tucker. Furthermore, she also served as a guest on CNN’s ‘Paula Zahn Now.’

You May Like: John Buccigross’s Net Worth, Career and Personal Life.

While Maddow kept making the headlines from The Rachel Maddow Show, she bagged several awards. Interestingly, she bagged three Emmy Awards and the Gracie Awards over the years for her amazing presence and worked on the global platform.

While Rachel Maddow remains quite vocal about her professional endeavors, she is quite secretive about her romantic side. While nothing is revealed on when the MSNBC journalist first came out as a member of the LGBT community, she became the first openly gay or lesbian host of a primetime news program in the United States in 2008.

Maddow is lucky to share her personal life with her partner, Susan Mikula. Interestingly, her soulmate is equally talented as she is a reputed American artist and photographer. The love birds met in 1999 when Maddow was working on her doctoral dissertation. They have been dating ever since, as she splits her time between Manhattan, New York, and West Cummington, Massachusetts. Despite more than two decades of dating, Maddow and her partner haven’t married to the current date.

Talking about the background of Rachel Maddow, she was born on April 1, 1973, in Castro Valley, California. In fact, she belonged to a higher class family to father, a former US Air Force captain Robert B. Maddow and school administrator mother, Elaine Gosse. In her family, she shares her bloodline with an elder brother, David Maddow.

Maddow described her family as ‘very, very Catholic,’ and she grew up in an extremely conservative society. During her teenage days, she was a competitive athlete and competed in high school volleyball, basketball, and swimming. Regarding her education, Rachel completed her high school from Castro Valley High School and went to Stanford University to get a public policy degree in 1994.

Also See: The Net Worth, Love Life and Career of Rosemary Church.