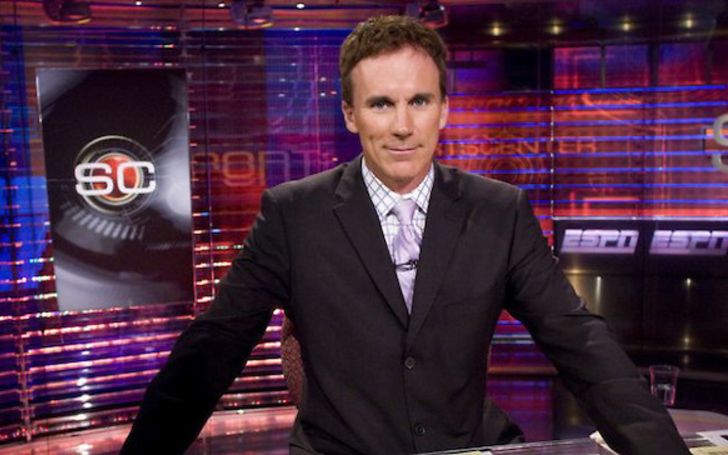 If you are a sports enthusiast, then you might be familiar with the name of John Buccigross or his face, at least. His introduction would be incomplete without mentioning how he has been an anchor for ESPN since 1996. The American Sportscaster contributed his journalism skills to some top shows of the networks like SportsCenter and Baseball Tonight. So, today we take you close to the personal life, net worth, and career details of the 55-year-old American journalist.

With over two decades of hosting and anchoring several shows at ESPN, John Buccigross has nothing to worry about when it comes to finances. Yes, the task of reporting sports action as they happen could be challenging, but it pays significantly in response to all the hardships to make up for everything. Specifically, John Buccigross gathers a massive net worth of $8 million from his career as a sportscaster.

Buccigross is one of ESPN’s finest anchors and sportscaster, thanks to his extensive experience and expertise. Consequently, he earns an enormous salary of more than $100,000 per year, which contributes big time to his net worth. Thus, with so much wealth, John Buccigross enjoys a lavishing lifestyle around all sorts of modern-day amenities.

John Buccigross is best known as the co-host of SportsCenter weeknights at 11 p.m. ET. Interestingly, his ESPN journey began in 1996, when he joined the network as the anchor of ESPNEWS. Furthermore, he also served as the primary host of NHL 2Night, the 30-minute program dedicated to hockey highlights and news. Similarly, he currently serves as the play-by-play voice of the NCAA Hockey Championship. In addition to that, he has been a weekly columnist at ESPN.com.

Apart from ESPN, he is also a member of the Advisory Board for You Can Play, a campaign that fights homophobia in Sports. In fact, he also wrote a book titled, “Jonesy: Put Your Head Down and Skate: The Improbable Career of Keith Jones.”

Also See: The Net Worth, Career and Married Life of Sam Kass.

Before joining ESPN, John Buccigross acquired vital experience at WPRI-TV in Providence, R.I. Although he started out as the station’s weekend sports anchor, he was later named the weekday anchor at the network. Likewise, the 55-year-old worked at Cape 11 News in Massachusetts from 1989 to 1994.

The ESPN journalist John Buccigross couldn’t replicate his professional life luck in his married life. Initially, he tied the knot with former girlfriend, Melissa Buccigross, on September 11, 1991. In fact, they enjoyed a lavish wedding ceremony in an Italian style in front of close friends and family.

Buccigross and his wife immediately started a family together, as they welcomed their first child, Malorie Buccigross, who currently lives in Chicago with her lover Jack in 1992. Similarly, the ESPN host gave birth to his second and third child, both sons Brett Buccigross and Jack Buccigross. Despite sharing three kids, they couldn’t work their marriage out as they parted ways with a divorce agreement on March 28, 2017.

Related: The Personal Life and Net Worth of Singer Holly Williams.