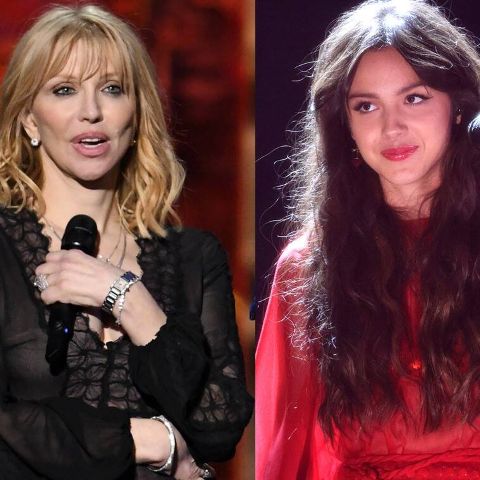 With tracks like “driver’s license” and “good 4 u,” Olivia Rodrigo’s album Sour has become one of the most popular albums of 2021. However, not everyone is happy with the teen’s promising career. Courtney Love of Hole says High School Musical stole Rodrigo’s prom-themed promotional image for Sour: The Musical: The Musical – The Series star, looking highly similar to the iconic album art from her band Hole’s record Live Through This.

Love on social media published Rodrigo’s photo with the caption, “Spot the difference! [hashtag twinning]!” and tagged Rodrigo in it. Rodrigo had shared the image on Twitter with the caption, “Since I never got to go to prom, I wanted to throw a little prom party with my fav [people] (you guys obvs),.”

Furthermore, she added “love u and live through this sooooo much” on Love’s post. “Olivia – you’re welcome,” Love responded to the 18-year-old. “My favorite florist is in Notting Hill, London! Dm me for deets! I look forward to reading your note!”

Despite the petty nature of the response, Love proceeded to rant about the homage on Facebook. Rodrigo’s creative decision was “rude,” and Love remarked, “manners [are] manners,” even though she is used to others imitating her art. Love’s rage on Facebook comments was far from over. In response to a statement from one of her followers, she replied, “Stealing an original idea without asking permission is rude.”

Moreover, she wrote, “There is no way to be elegant about it. I’m not angry. It happens all the time to me. […] I’m very gracious or say nothing. But this was bad form. That’s not bullying or bomb-throwing. This person’s music has nothing to do with my life. Possibly never will. She added it was rude and I have every right to stick up for my work. Don’t gatekeep me! I’m honorable as f— to my fellow artists, and I expect the same.”

In her remarks, Love also mentioned Disney. “I’ve informed her [and] I await her flowers and note. I hope it’s long,” she explained. “Does Disney teach kids reading and writing? God knows. Let’s see. Yes, this is rude. Rage inducing? Honey if I had a dollar for [every time] this happens? I’d be real rich!” When people started pointing out that both Sour and Live Through This seemingly paid homage to Carrie’s classic film, Love took umbrage with the insinuation that her idea wasn’t original.

Love added, “And just to clarify? The Brian de Palma classic Carrie is another thing,” Love wrote. “My cover was my original idea. A thing you maybe have to actually live life to acquire? I don’t know. Anyway. Disney? Yes, it’s rude.”