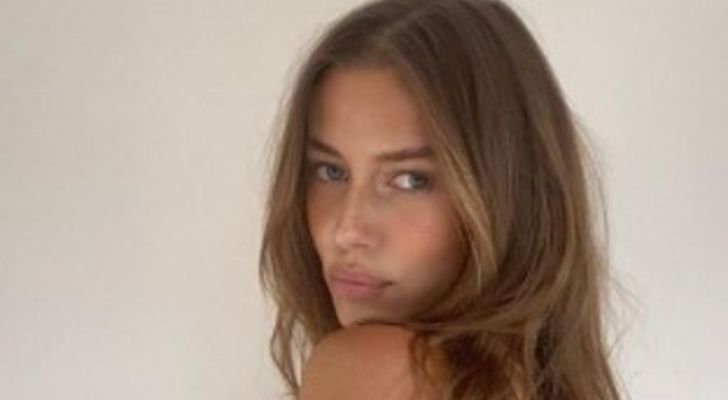 Everyone is talking about Nicole Poturalski right now, why? Well, there is news of her dating the superstar Brad Pitt. Indeed, it’s everywhere now that they are in a romantic relationship. However, Nicole is a married lady and mother to her son. And we all know love life of Brad and his six children. Let’s learn more about Nicolee Poturalski in this article today.

The news of Nicole Poturalski and Brad Pitt’s dating is all over the world, though they haven’t declared anything about their relationship officially at the moment.

It is said that veteran actor, Pitt saw Poturalski for the first time at Berlin restaurant, Borchardt in August 2019. Love at first sight that’s what he felt after seeing Poturalski. He was mesmerized by the 27-years-old beauty when he saw her at the restaurant.

Like Pitt, Poturalski is also married; however, unlike him, she is still in the marital relationship. She tied the knot with her husband Roland Mary, 68. Her beau is a flamboyant owner. Further, the diva shares a seven-year-old son named Emil with her lover, as per Daily Mail.

As per sources, Mary is a philosophical guy, so he isn’t phased after learning about the growing romantic relationship between Pitt and his wife, Poturalski. There are even speculations running in the media world that the married couple is in an open marriage relationship.

Currently, Pitt and Poturalski are spending their time in Chateau Miraval, an estate owned by Pitt. He bought that property with his ex-wife, Angelina Jolie for $67 million in 2011.

Speaking of Pitt’s former lover, there is a rumour that Poturalski resembles a lot like Angelina, which is one of the factors that attracted him towards his new girlfriend.

Net Worth and Career Details of Nicole Poturalski

Nicole Poturalski holds an estimated net worth of $1 million as of 2020. Indeed, she is a millionaire and credit goes to her outstanding modeling career.

The German native, Poturalski, is a gorgeous model. No wonder why Pitt fell for her. Professionally, she uses the name, Nico Mary, as per Elle. Furthermore, she is represented by A Management, Next Models, and Official Models.

In her fruitful career, Poturalski appeared on several reputed magazine covers, one of which being Elle Germany. Subsequently, she also graced the covers of Harper’s Bazaar Germany.

Talking more about Poturalski’s professional life, let us break it down to you guys that she wanted to be a marine biologist while growing up. However, her dream changed after a talent scout discovered her at Disneyland Paris. She was only 13-years-old back then.

The 5’10 beauty, Poturalski lives a beautiful and luxury life which can be proved by her Instagram post. She got more than 170K followers, and she frequently posts gorgeous photos of herself.