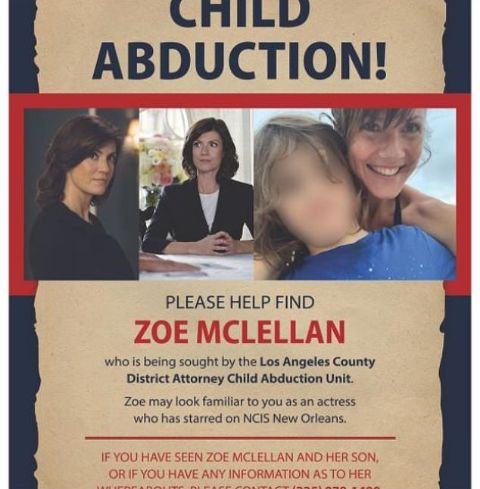 Zoe McLellan, a former NCIS star, is suspected of kidnapping after vanishing with her son during a custody battle with her ex-husband. Jean-Pierre Guy Gillian, the ex-husband of the American TV actress, claims that McLellan has disappeared with their son, Sebastian, who was born in 2013.

According to court records obtained by TMZ, McLellan has been labeled as “wanted” after Sebastian’s father sought help from the court. Similarly, an arrest warrant for McLellan was issued in May 2021 in Los Angeles County. According to a Criminal Case Summary filed with the Los Angeles Superior Court, McLellan was charged with kidnapping in May.

According to his attorney Lawrence Markey, Gillain claims he hasn’t seen or heard from his ex-wife or son since around April 2019. The child is still missing and is believed to be with McLellan. TMZ also noted that the LA County Sheriff’s Office has no record of an arrest.

According to sources familiar with the case, Gillain last heard from his ex near NOLA and still has no idea where McLellan and his son are. The Blast reported McLellan was cleared of previous kidnapping accusations in 2018 when a judge ruled that moving her son to Canada was not child abduction.

The 46-year-old was accused of child abduction by Gillain after relocating their son to Toronto without her ex-permission husband after landing a role in the TV drama Designated Survivor.

The judge reported the move as a “result of Mother’s work in a field in which it was known to both parties she may need to work outside of Los Angeles.” According to The Blast, the judge said Sebastian is “more emotionally secure with Mother than with Father.”