Devin Armani Booker is a professional basketball player in the National Basketball Association for the Phoenix Suns (NBA). Know more about him down below. 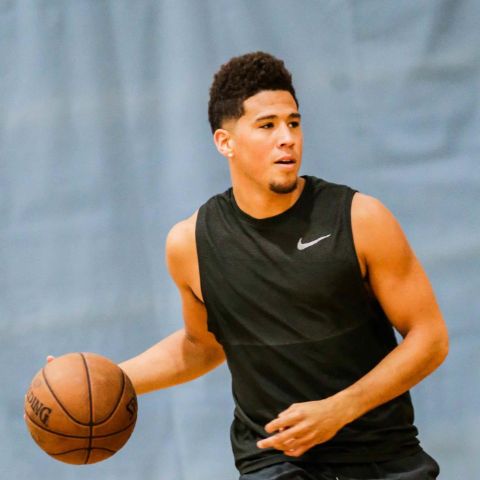 According to Forbes, Devin Booker is a professional basketball player in the United States with a net worth of $26.6 million. He is the 62nd highest-paid athlete in the world. In 2018, Booker signed the richest five-year contract in Phoenix Sun’s history, worth $158 million. The contract has a cap of $36 million for the 2023-24 NBA season.

In 2019, the point guard was a highly sought-after sneaker-free agent, allowing him to sign a lucrative contract extension with Nike. Booker is known for his desire to give back to the community. After working with the suns charities’ board of directors, the NBA star pledged $2.5 million to five non-profit organizations. During the COVID-19 lockdown, the Sun’s guard donated $100,000 in and around Phoenix and ran a fundraising campaign to help the community.

Devin Booker demonstrated his exceptional athletic ability while in high school. In August 2011, Devin scored 17 points in the fifth game of the season against ‘Gulfport High School.’ His total score was higher than that of the rest of his team. Devin’s play improved over time, and his father soon announced that he had been contacted by a few “NBA” teams interested in acquiring Devin.

His college basketball experience would shape the NBA star’s future as a star basketball player. Devin announced his acceptance to the ‘University of Kentucky’ during a ‘Moss Point High School ceremony in October 2013. His first season at the university ended with an average of ten points, and he was confident of earning a respectable spot in the upcoming ‘NBA’ draft. Devin decided to forego his remaining college years in April 2015 and enter the ‘NBA’ draft.

The ‘Phoenix Suns’ selected him as the 13th overall pick in June 2015. Devin averaged more than 15 points per game in his first seven ‘Summer League’ games, proving his worth. He made his professional ‘NBA’ debut against the ‘Dallas Mavericks’ two days before his 19th birthday.

The point guard has remained a one-team player to this point, as he continues to play for the Phoenix Suns, the team that drafted him in 2015. Booker entered the league as the 13th overall pick and quickly established himself as a star. After a string of 30 point games, Booker finished fourth in the Rookie of the Year voting. Booker made significant strides during his sophomore season, and several legends in the game praised his scoring ability.

When he did so against the Boston Celtics in 2017, at the age of 20, Booker became the NBA’s youngest player to score 60 and 70 points in a game. His record-breaking ability was immense, and in July 2018, the Suns strengthened their relationship by offering him a five-year, $158 million contract.

During the 2018-19 regular season, Devin averaged 26.6 points per game, but it wasn’t enough to get the Suns into the playoffs. In the following season, he had a similar scoring performance. Still, this time was different because the 2019/20 regular season was halted and restarted in a closed bubble due to the COVID-19 pandemic.

Kendall Jenner and Phoenix Suns star Devin Booker was first linked in April 2020 when they were on a road trip. The supermodel is known for keeping her personal life private, so when she confirmed her relationship with the NBA player in February 2021, fans were taken aback.

Now that Booker is dating one of the world’s most famous reality stars, his name has become synonymous with more than just his basketball accomplishments. According to Gossip in The City, Booker was rumoured to have gotten model Aaleeyah Petty pregnant in 2019.

According to the outlet, his high school sweetheart was also expecting at the same time. Furthermore, he was dating Kylie Jenner‘s former best friend Jordyn Woods while these two women allegedly had his baby. However, those reports turned out to be untrue.

Devin Booker was born in Michigan on October 30, 1996, to Melvin Brooker, an African–American father, and Veronica Gutiérrez, a Mexican–American and Puerto Rican partner. The couple did not marry, but they remained friends. They decided that they would both look after Devin after he was born, but he mostly stayed with his mother because his father was busy with his international basketball career.

The player was born and raised in Grandville, Michigan, a suburb of Grand Rapids. He spent his summer vacations in Moss Point, Mississippi, with his father, a town with a large black population. For young Devin, this was a significant culture shock, but he handled it admirably. Devin’s father’s lifestyle influenced him greatly as he grew up.

Melvin Booker retired from his professional basketball career to be closer to his son after Devin began attending ‘Grandville High School.’ Melvin worked hard to permanently bring his son back to Mississippi after noticing his immense talent, even though Devin was initially adamant about not going to Mississippi.