All About Miles Teller and His Wife Keleigh Sperry Love Story 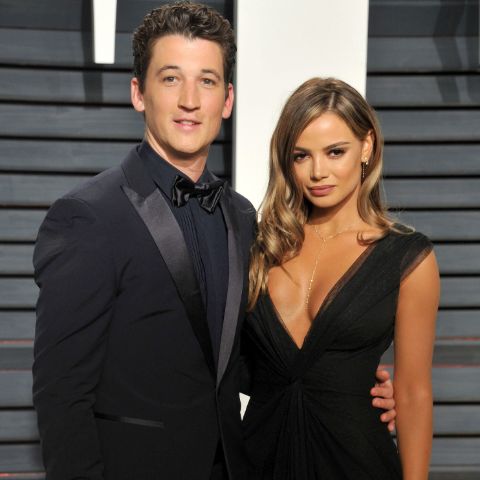 Miles Alexander Tell is an American actor known for his role in Rabbit Hole’s movie and for starring alongside JK Simmons in the 2014 film Whiplash. The movie Whiplash is an Oscar-winning movie. He has won a Dramatic Special Jury Award at the 2013 Sundance Film Festival for his performance in The Spectacular Now.

Furthermore, Miles was born on February 20, 1987, in Downingtown, Pennsylvania. His mother is Merry, a real estate agent, and his father is Michael, a nuclear power plant engineer. He has two older sisters named Erin Teller and Dana Teller. Moreover, Miles holds an American nationality and belongs of Russian-Jewish descent. Teller is a fan of the Philadelphia Phillies, Philadelphia Flyers, and Philadelphia Eagles.

The 34-years-old Teller attended Lecanto High School, where he played the alto saxophone in a rack band. He was the drummer for a church youth group band and was president of the drama club. Also, Teller played baseball, piano, and guitar. Later, he joined New York University Tisch School of the Arts and earned a Bachelor of Fine Arts. Miles also studied method acting at the Lee Strasberg Theatre and Film Institute.

Talking about the couple’s love story. The duo first met in the year 2013 at a party thrown for Grammy-winning band Black Keys. The actor fell in love with the model the moment he saw her. Then, Teller asked her for a date, and it was successful to date within a week. In an interview with Vogue, Miles said”, I didn’t think it went well but after a few more attempts, I got her to dance with me. After we met, I knew she was the one”.

Similarly, Sperry also found Teller very charming and charismatic. She mentioned, “I adored him from the first moment we met.” Finally, Teller planned to propose to her. His proposal to Sperry wasn’t an ordinary one. He offered her lady love a Molori Safari gateway. Sperry found a rose hanging on a tree during their vacation and a note along with it in 2017. And surprisingly, she was Teller sitting on one knee and proposing to her. She immediately said ‘yes’ to the proposal.

Click Here to Know: What is The Net Worth Collection of Ree Drummond?

In an instance, the couple got engaged. Sperry once said, “I will never get the image out of my head of him down on one knee with a tear in his eyes,” Later, love birds tied a knot on September 1, 2019, in Maui. They had a huge wedding ceremony. After a certain time of marriage, unfortunate Covid-19 arrived. The romantic couple spent the time during the pandemic together cooking, renovating their and giving their time to each other. Currently, the duo is living happily.

A Little More About Miles Teller

Talking about his career, Miles Teller began acting on a low-key note, accepting small roles in low-profile short films and telefilms. He appeared in the short movie named Moonlighters that was released in 2004, in which he portrayed a character sharing his first name. After that, Teller continued to work in several other inconspicuous short films from 2004 through 2010; some movies are A very Specific Recipe (2007), The Musicians (2008), and The Track Meet (2010).

Furthermore, Teller came to the limelight when he successfully auditioned for ‘Jason’ in the John Cameron Mitchell-directed drama movie, Rabbit Hole, released in 2010. He got a chance to share screen space with popular Hollywood stars, including Nicole Kidman, Aaron Eckhart, and Dianne Wiest in ‘Rabbit Hole.’ Surprisingly, Miles was examined for the character of ‘Jason’ by none other than Nicole Kidman.

After the movie’s release, Teller won a Chlotrudis Award in 2011 for his performance in Rabbit Hole in the Best Supporting Actor category. Also, he was nominated for a Discovery Award following the screening of the movie at the Savannah Film Festival in Savannah, Georgia. Succeeding a movie, Miles got an opportunity in 2011 when he was offered to reprise Willard Hewitt’s personality in the film adaptation of the musical drama, Footloose, starring Andie MacDowell, Dennis Quaid, Kenny Wormald, and Julianne Hough.