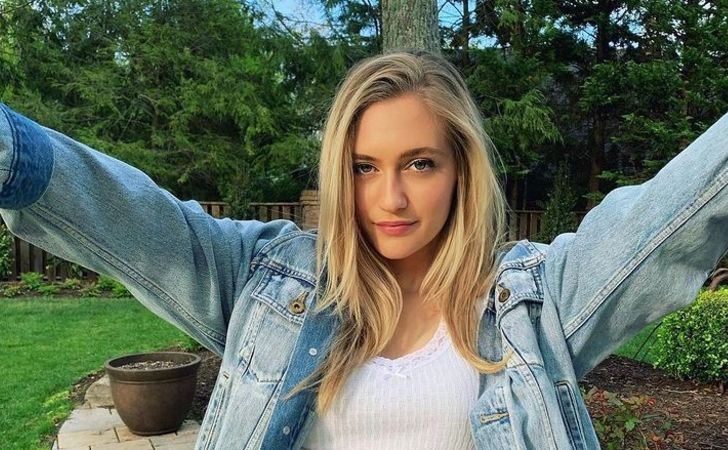 Maggie Sajak is the daughter of Wheel of Fortune host Pat Sajak and photographer Lesly Brown Sajak. Because she’s a celebrity child, the 25-year-old beauty has been in the limelight before she even took her first breath in this world. However, she isn’t only known for being the daughter of her renowned father, Pat. What? Yes, she walked on her dad’s path and entered into the entertainment industry but as a country music singer. You would love to learn many things about her; thus, keep on reading to know it all.

Born on January 5, 1995, in Maryland, Maggie Sajak is the younger of Pat Sajak’s two children. Her mother’s name is Lesly Brown, a photographer, whereas her dad, Pat, as we already know, is a television personality.

Talking about her siblings, Maggie, 25, grew up alongside her elder brother, Patrick Michael James Sajak, 30. Surprisingly, she might have another brother besides Pat Jr. How?

Previous to Lesly, Maggie’s old man was married to a woman named Sherrill Sajak. Although the former duo never gave birth to a child of their own, Sherrill was mother to her son, to whom she welcomed with the man she tied the knot before Pat. And if that counts, then she got two elder siblings in her family.

What’s Maggie Sajak Net Worth? A Country Music Singer Aiming To Be a Doctor

Maggie Sajak’s father, Pat, is a multi-millionaire. He achieved massive success in his career field, which led to a lavish lifestyle for him and his family. Therefore, coming from a wealthy family, Maggie got nothing to fear when things arise about finances.

Even though Maggie got nothing to fear financially, she, at an early age, came so far that she already earned quite a lot independently. Yes, she entered the music biz as a country artist and, as of 2020, has an estimated net worth of $1.5 million, as noted by Celeb Pie.

Maggie garners her fortune from the successful musical projects she worked on up until now. Her voice is as beautiful as she is, and she already recorded many hit songs. She showed an interest in music at a young age. How young? Well, she was only 12 when she began to play guitar.

Related: Know All About The Celebrity Kid Helene Boshoven Samuel

In 2011, she released her first single, First Kiss, an upbeat country-pop song. Besides that, she created several other musical arts. However, although she is fascinated with singing, the beauty also wants to build a career in the medical field.

Yes, you read it right. Young Sajak is aiming to be a doctor in the near future. It was her childhood dream, as The Boot noted. But even though she is seeking to be a doctor, she will not leave the music biz. Maggie wants to balance both of her life as a singer and a medical practitioner.

In order to fulfill her dreams, she even attended Princeton University, but it’s unclear what degree she ended up graduating with, as per Distractify.

Besides Maggie Sajak’s work in the music industry, she also has a little modeling experience. According to TV Over Mind, the young Sajak posed some photos with the infamous Teen Vogue back in 2013.

In addition to singing and modeling, Maggie also worked on her dad’s show, Wheel of Fortune. She did that for the week of January 6 to 10, 2020.

After her father went through horrific pain, which led to emergency surgery, Pat took some time away from his work. Because the show must go on, his co-host, Vanna White, took over his place for the time being, and in her place, Maggie joined the team. Previous to this, she had made a couple of entrances on Wheels when she was a toddler.