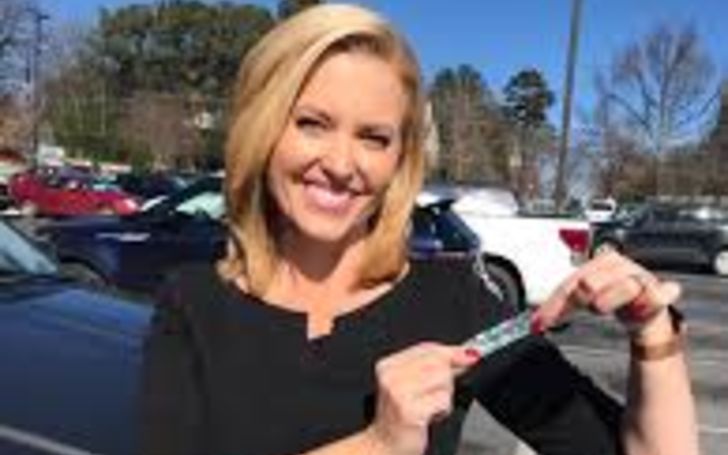 Linda Stouffer is an American anchor who works as a news correspondent and anchor for WST-TV 2 in Atlanta, Georgia. For the channel, she co-anchors the early morning news broadcasts This Morning from 4:30 am to 7 am. The award-winning journalist previously worked for CNN, WSVN, and KMOL. Speaking about her personal life, she is a family person and has a lovely family. Let’s take a look at her life!

Who is Linda Stouffer’s Husband? How Many Kids Does She Have?

Linda Stouffer has been married to her husband, Mark Strassmann, of many years. Like her, her spouse is also a journalist and is a CBS correspondent based in Atlanta.

The couple tied the knot in the presence of their respective family and friends in 1995. It has been twenty-five years since their special day, they still maintain an incredible bond and have been living happily as husband and wife.

You May Also Like: CNN Journalist Jose Andino’s Married Life And Kids!

From their marriage, the pair shares two children, a daughter, and a son. She is living a happy life with her family.

As a journalist, Linda remains busy with her works most of the time, but in her spare time, she likes to spend it with her partner and kids. Right now, she is residing with her family in Georgia.

Linda Stouffer’s Net Worth And Career in Journalism

Through her decades in the news and media career, Linda Stouffer has a net worth of $3 million. She possesses extensive expertise in the industry for someone who worked years in various companies, and no doubt earns a hefty salary.

In her many years of career, she has worked in news companies like WOAI, previously known as KMOL in San Antonio, Texas. She joined the company in the position of general assignment reporter. After that, she worked as a reporter and anchor at WSVN in Miami, Florida.

Check out the clip of Linda Stouffer anchoring CNN Headline News while she was at CNN!

The veteran journalist joined CNN Atlanta in 1997, where she worked till 2008. Right now, she is serving in WSB-TV 2 and anchors Channel 2 Action News morning newscasts. Previously, she anchored the news at 5 and 6 pm during the week while anchored 6 pm news and the Action News Nights on Sundays.

Linda Stouffer was born as Cinnamon Linda Stouffer on August 05, 1970, in San Marcos, Texas. She attended the public school system graduating from San Marcos High School in 1988. While at high school, she became Texas’ Junior Miss and also participated in America’s Junior Miss Scholarship Program in 1988.

The 49-year-old attended the University of the Incarnate Word in San Antonio, Texas, after getting Phil Beta Kappa scholarship. Likewise, she graduated with a bachelor’s degree in communication in 1992.

During her time in CNN, she anchored CNN Headline News and covered major events and news like the 9/11, the wars in Iraq and Afghanistan, the capture of Saddam Hussein, presidential elections, hurricanes Katrina and Rita and many other international events.

Besides journalism, Linda also actively participates in volunteering activities and has volunteered for SafePath Children’s Advocacy, CureSearch for Children’s Cancer, March of Dimes, and local education groups and schools.