Kimberleigh Marie Zolciak, best known as Kim Zolciak, is a renowned American television performer and singer who catapulted to recognition after appearing on the five-season reality show 'The Real Housewives of Atlanta.' Know more about her down below. 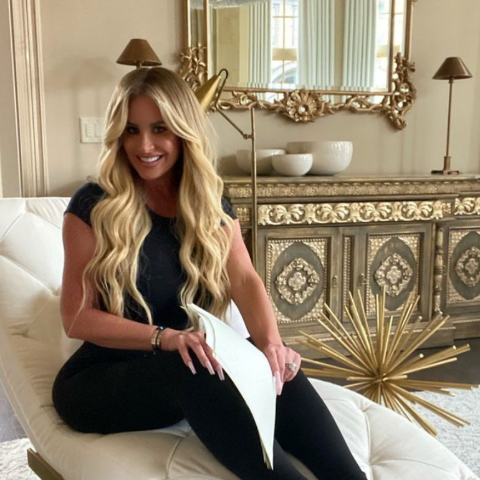 On May 19, 1978, Kim Zolciak-Biermann was born in Pensacola, Florida, but grew up in Windsor Locks, Connecticut. She is the daughter of Joseph and Karen and was reared in a military family. Michael is her only sibling. The brothers and sisters were raised as Roman Catholics. Kim had an affair with a police officer when she was 17 years old.

The artist had interviewed her as a witness in a criminal inquiry. The cop was fired, yet he only received a 45-day suspension without pay. Zolciak attended East Catholic High School in Manchester, Connecticut, and the University of Connecticut. She went to nursing school. Kim moved to Atlanta, where her parents had moved, after graduating at the age of 21.

Kim Zolciak-Biermann is a reality television star and musician with a $3 million net worth. Kim debuted Kashmere, her luxury beauty and lifestyle brand, in 2016. Kim distributes skin, hair, and body products and blended oils and spa accessories through Kashmere Kollections. They sell cosmetics such as lipstick, eyeshadow, and other cosmetics. She has launched her swimwear line, Salty K. The products she offers range in price from $90-$180.

The television star’s spouse, Kroy Biermann, also contributes significantly to her extravagant lifestyle. With a salary of $2.5 million, his net worth is estimated to be $5.5 million. Kroy made the majority of his money while playing football for the Atlanta Falcons. Kim and Kroy have a combined net worth of $8 million.

Kim Zolciak-Biermann worked as a nurse in Georgia for more than five years before landing her first reality show, ‘The Real Housewives of Atlanta,’ better known as RHOA, on ‘Bravo’ in 2008. The plot centers around three women’s personal and professional life in Atlanta, Georgia. Kim appeared on the show from its first to fifth seasons. The show is currently in its eighth season, and she has featured as a guest on it.

The celeb began listening to country music in 2008. In 2009, she debuted her first track, ‘Tardy for the Party,’ on reality. The song has been downloaded over 100,000 times, making it the most successful song by any cast member on ‘The Real Housewives of Beverly Hills.’ Kim was cast in a reality program spin-off named ‘Don’t Be Tardy for the Wedding’ after completing a successful fourth season. The show focused on her wedding preparations with NFL player Kroy Biermann.

Following the popularity of her second reality program, she and fellow ‘Real Housewives’ star Ne Ne Leakes were to have their show named ‘Ne Ne and Kim’ on the ‘Bravo’ network. The show, however, was canceled. On the ‘RHOA’ show, she also released several more popular singles, including ‘Google Me’ in 2011 and ‘Love Me First’ in 2012.

‘Tardy for the Party,’ composed by Kandi Burruss, Joel Bowles, Darnell Richard, and Kim. On the other hand, Kim alleges that the song was composed by her daughter Brielle and was later worked on by Kandi Burruss. In 2009 and 2010, the song was remixed. However, what sparked controversy was Kim and Burruss’ ongoing battle over copyright concerns throughout the second and third seasons of the RHOA show.

Burruss accused Kim of evading some payments throughout the song’s development. Her claim also reflected the song’s pending revenues. In 2013, she sued Kim, claiming that Kim profited from the music “without plaintiffs’ authorization, license, or consent.” However, the lawsuit was dismissed after seven months because the judge determined that Kandi Burruss had not produced sufficient evidence to support the claims against the accused.

Brielle, Kim Zolciak-Biermann’s first child, was born on February 25, 1997. When her daughter was born, she was only 18 years old. Kim has never revealed Brielle’s father’s name. Kim married Dan Toce in 2001. They were married for two years before filing for divorce in 2003. On October 18, 2002, they became the delighted parents of Ariana. Several years after his divorce from Kim, Dan Toce was accused of abusing a youngster.

Following Zolciak’s divorce, she kept her connections private until 2010, when she revealed that she was bisexual and was in a relationship with DJ Tracy Young. However, during a charity event the same year, she met NFL footballer Kroy Biermann of the ‘Atlanta Falcons.’ Even though Kroy was previously rumored to be in a relationship, the two supposedly hit it off and began dating.

In May of 2011, Kim gave birth to her third child, Kroy Jagger Jr. On November 11, 2011, she married her fiancé Kroy Biermann in front of the entire world in an episode of her show. Kash Kade, her fourth child, was born the following year. On November 25, 2013, at the age of 35, she gave birth to twins Kaia Rose and Kane Ren. Kim’s children Brielle and Ariana, who later took their stepfather’s surname, were adopted the same year by her husband, Kroy.