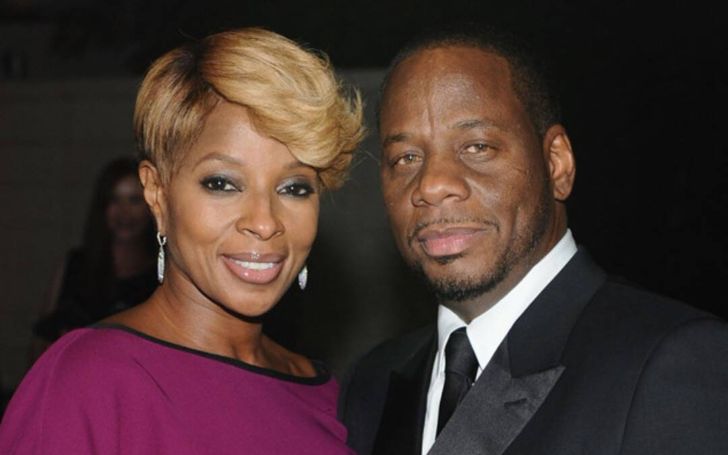 Those who are familiar with the works of R&B singer/songwriter, Mary J. Blige might know her ex-husband Martin Issacs aka Kendu Issacs. They tied the knot back in 2003, and their life as a married couple ended legally in 2018. Before their marriage, the former lover was related professionally. Kendu was the manager of Mary. Let’s learn more about him on today’s article.

Kendu Isaacs was a married man before he tied the knot with Mary J. Blige. He welcomed two sons, Nas and Jordan, with his first wife. Before that, he was also raising a daughter, Brianna, who resulted from his teenage relationship.

Indeed, Kendu was the father of three before starting his married life with Mary; however, that’s not all. According to Live Ramp Up, when the ex-couple got together in 2003, Kendu was still with his wife.

It’s said, due to that, Brianna harbored resentment towards Mary, which ended up with Brianna running away from home at the age of 15. Further, she got tangled with cocaine becoming an addict. Luckily, everything is fine as of now; however, sources claim she professed sorrow over the divorce of her dad, Kendu, and step-mom, Mary.

The former pair, Kendu Isaacs and Mary J. Blige, ended their relationship. They went separate paths in 2016, and after around two years, their divorce got finalized in 2018.

According to Amo Mama, Kendu was the one who cheated on Mary; while they were still in a marital relationship, he was dating someone else. Although it isn’t for sure, it’s believed that he was with a much younger woman, Starshell, a rising artist who Blige took under her wings as a protégé.

When Mary found out about Kendu cheating her, she filed for a divorce. However, it took over two years for it to settle legally. Why? Because Mary’s estranged husband, Kendu, asked her to pay him $30 thousand in temporary spousal support.

Furthermore, in 2017, he even appealed to increase spousal support, pointing out being unemployed and impoverished. He asked for around $65 thousand per month.

After all that, Mary found that Kendu, 49, never loved her, and he was only with her for her money. Surely, she had a hard time digesting the harsh reality knowing her lover was a fraud. But Kendu was also facing some tough time after his cover was blown. His condition was so bad he even got hospitalized, as noted by The Blast.

Kendu Isaacs Net Worth Collection as of 2020

Speaking of Kendu Isaacs’s net worth, he holds an estimated net worth of $4.5 million, as of 2020. But, while he was married to his ex, Mary, he enjoyed 10% of her gross income, as Just Richest pointed out. However, that privilege ended when his relationship with her ended.

Indeed, Kendu lost all of those luxuries he had when he was married to Mary. Due to that, he faced a financial crisis, which also put him into a hospital bed. Further, because of that, he was asking for additional amounts in spousal support.

After all ups and downs sources claim Kendu’s back in business. He’s still in the music industry as a producer and manager.

How much is Kendu Isaacs worth?

Does Mary J Blige and Kendu Isaacs have children together?

Kendu Isaacs is dad to his three children but none of them are from Mary J. Blige; thus, no they don’t have children together.