Jayne Pietrangelo is the adoring and supportive wife of Alex Pietrangelo, a defenseman and captain for the St. Louis Blues in the National Hockey League. Keep scrolling down to know more about her. 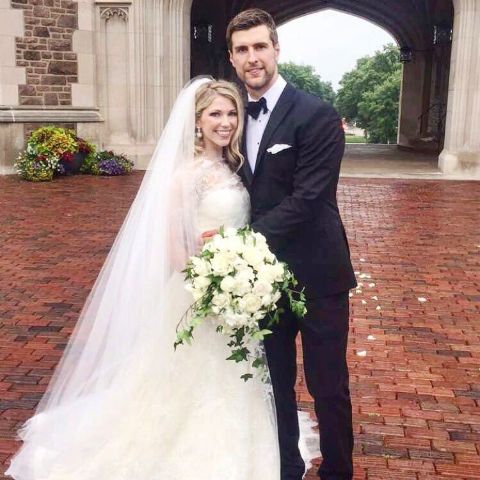 Jayne Pietrangelo is happily married to her husband, Alex Pietrangelo, a Canadian professional Ice-hockey player. On July 2, 2016, the couple married. We also deduced from the references to the photos that the couple married lavishly in the presence of friends and family.

The player’s wife, Jayne, a native of Bridgeton, Missouri, was a member of the Rams cheerleading squad in 2009, 2010, and 2011. In addition, Evelyn Pietrangelo, Theodore Pietrangelo, and Oliver Pietrangelo, the couple’s triplets, were born in July 2018.

Jayne Pietrangelo has not revealed her net worth. So, we will be focusing on her husband, Alex Pietrangelo’s net worth. Alex is a professional hockey player from Canada with an estimated net worth of $20 million. His NHL career is a significant source of income for him.

In addition, Pietrangelo paid $1.9 million for a home in Ladue in May 2017. The 5,150-square-foot house has five bedrooms and six bathrooms. It also has a wet bar, two fireplaces, two dishwashers, two bathtubs, a double oven, and a double oven. The home sits on 0.75 acres and has a 4-car garage, so there’s plenty of room for a pool.

Alex Pietrangelo’s first entire season with the Blues was in 2010-11, when he led all team defensemen with 43 points in 79 games. Because of his previous eight- and nine-game NHL seasons, he didn’t qualify as a rookie. In comparison, Pietrangelo’s teammate Kevin Shattenkirk, born a year earlier, was the season’s leading scorer among rookie defenders, with 43 points.

On August 24, 2016, the Ice-hockey player was named captain of the St. Louis Blues. Alex competed for Team Canada at the junior and senior levels, winning gold with Canada’s under-20 team at the 2009 World Junior Championships. On January 7, 2014, Pietrangelo was named to Canada’s 2014 Olympic hockey team, and he went on to win gold at the 2014 Olympic Winter Games in Sochi, Russia.

Jayne Pietrangelo was a former NFL cheerleader who cheered for the Los Angeles Rams in 2009, 2010, and 2011. She was not only featured in the Rams Cheerleaders calendar in 2012, but she also made the cover. Bridgeton, Missouri, is her hometown. Jayne has an older sister who was also a Rams cheerleader when she was growing up.

The lovely blonde, who started dancing in the fifth grade, has a long history of charitable work. During her cheering days, she was always up for helping special events involving helping children, such as the Make-A-Wish Foundation. She’s also involved with the Komen Race for the Cure, which she supports because her grandmother is a cancer survivor.