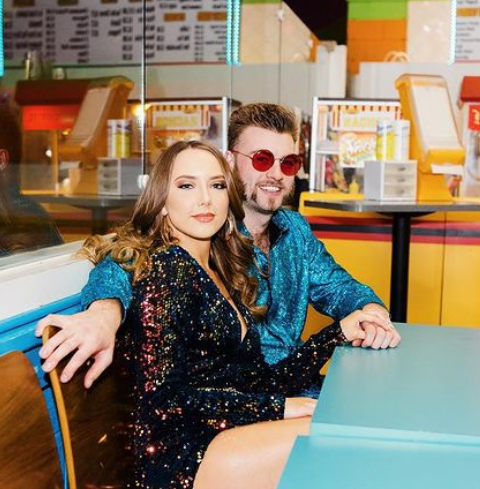 Eminem’s daughter Hailie Jade who typically shares photos of herself on social media, posed for a sweet photo with her boyfriend, Evan McClintock. Hailie is shown in the image wearing a cut-out dress and a straw hat, with her arm around her boyfriend.

The 25-year-old, whose father is rap legend Slim Shady, usually updates her Instagram feed with fashionable outfit photographs and snaps from her sun-kissed vacations. Still, she did something different on Sunday, giving fans a rare look at the second most important man in her life.

Hailie wrote, “I rarely share my feed, but when i do i’m happy it’s with you,” with heart and fire emoji in the caption. Fans were ecstatic to learn more about Hailie and Evan’s connection. It’s the first time Evan has featured in her stream since she photographed with him on her 24th birthday in December 2019.

The pair met at the University of Michigan when they were both students. Hailie earned her bachelor’s degree in psychology in 2018. According to a source, Hailie’s family has accepted Evan; they are a great young couple who prefer comfortable nights over loud partying.

Eminem discussed his life as a father, which he usually keeps private, during an appearance on Mike Tyson’s Hot Boxin’ podcast in March 2020. He said, “Hailie is 23, no babies, she has a boyfriend, but she’s doing good,” the rapper added, “she’s made me proud for sure, she’s graduated from college.”

The rapper’s daughter wants to test the waters by posting snippets of her life on Instagram, but she isn’t ready to commit. She likes to keep a low profile, walk her dog, go to fitness classes, hang out with her friends, and go on vacations with Evan.

Eminem, 48, also talked about his other daughters Alaina Mathers and Whitney Scott Mathers, in his interview with Tyson, saying, “It definitely is crazy.” He added, “I also have a 26-year-old niece whom I helped raise and who is almost like a daughter to me. I also have a younger child, who is now 17 years old.”