Who is Dianna Russini’s Husband? Find The Details Here 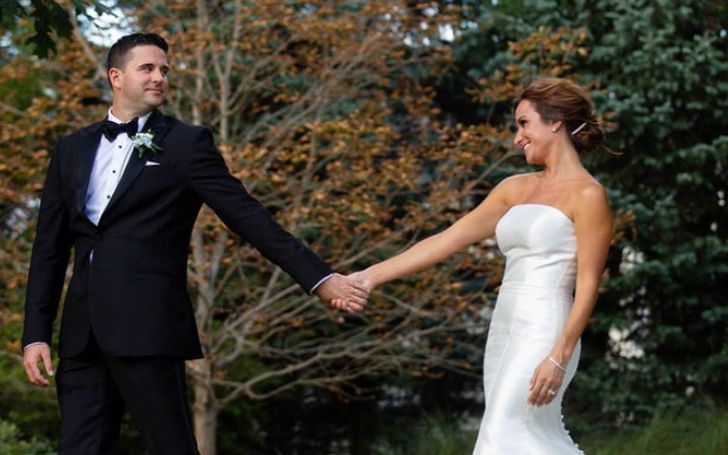 Before knowing anything about Dianna Russini‘s husband, we should know a little bit about Dianna’s life. Dianna Marie Russini (born February 11, 1983) is an American sports journalist who works for ESPN on NFL Countdown and NFL Live as an NFL host, reporter, insider, and commentator. In July 2015, Russini joined ESPN as a SportsCenter anchor. She worked as the principal sports anchor for WRC-TV in Washington, D.C., before joining ESPN.

Dianna Russini, an ABC sports anchor, has been keeping her personal life private. She recently hinted at her boyfriend, Kevin Goldschmidt, being her fiance. In July of 2020, she introduced her partner. The news reporter then announced her engagement on Instagram a few hours later.

On September 26, 2020, Russini and Goldschmidt married in a low-key, socially distant wedding ceremony. The event was indeed live-streamed to their loved ones. On social media, she captured the events of the day.

Moreover, The ESN’s NFL reporter stated that her wedding day was set to be February 20, 2021. Thankfully, they married five months earlier, allowing them to avoid a cocktail hour when half of the guests would be engaged with Carson Wentz trades.

Click Here To Know About: Chris Cuomo’s Net Worth Collection

The love birds will be celebrating their first wedding anniversary on September 26, 2021. However, the duo hasn’t shared any child from their marriage till now. Russini had a baseball player called David Wright as a boyfriend in 2008. David, on the other hand, married supermodel Molly Beers in 2013.

Kevin Goldschmidt was born on June 6, 1985, in Pennsylvania and has lived in New York. He is 36-year-old as of 2021. In addition, he holds an American nationality, and his zodiac sign is Gemini. Kevin likes to keep his personal life private. So, there are no details regarding his parents and siblings.

In 2007, The 36-year-old graduated from Penn State University with a bachelor’s degree in finance. He acquired a position supervising account operations analysts at SEI not long after. From 2007 through 2011, he worked there. Furthermore, Kevin left in 2011 to work as a senior analyst with the Hay Group.