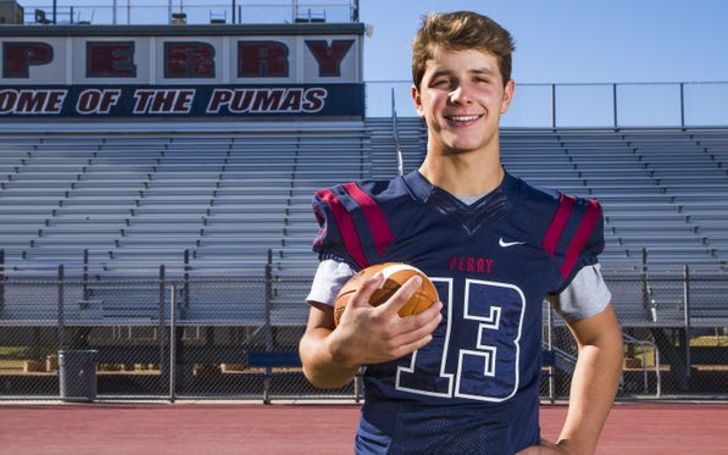 For those who got no idea on who Brock Purdy is, let us break it down to you, he is an American football quarterback for the Iowa State Cyclones. He’s only 20-years-old but has managed to gain massive popularity within the crowd from his outstanding gameplay. The budding athlete hails from Gilbert, Arizona.

Before we talk about Brock Purdy’s net worth, it’s essential to know that he’s a college athlete. Indeed, he is in the early phase of his career. We mean he hasn’t begun to play professionally.

Because Brock’s watering his college career, he might not be paid for his matches. Due to this reason, his actual net worth is unknown. However, he did earn a scholarship from the university as a college athlete. At the moment we write about him, he’s committed to Iowa State Cyclones.

As noted by 247 Sports, Brock has an excellent record to back a bright career in the football world. He even received a couple of awards for his fabulous matches.

Previously, Brock trained himself by joining the football club in his school. He passed out from Perry High School in his hometown. As a high school student, he passed for 8,937 yards and 107 touchdowns.

Is Brock Purdy Dating Anyone?

For those who are curious to know about Brock Purdy’s relationship status; sadly we’ve to bring it to you guys that the internet world has no idea on this topic.

Indeed, no one knows on the media side whether Brock is seeing anyone at the moment. Further, his previous dating history is also unknown.

The reason behind this situation might be that he is totally focused on his goals. He’s working hard to build his career in the football world. Most of his social posts are all related to his life as a young sportsman. Thus, he might not have time for his love life.

Further, Brock is in his early twenties, and life is just beginning for him. We mean he is still young and might be single at the moment we write about him. However, sooner or later he will find his perfect one, so until then all we can do is wait.

Talking about Brock siblings, he has a brother name, Chubba Purdy. Like him, his brother is also paving his way to becoming a famous football player. Currently, he is a quarterback at Florida State Seminoles football team.

Besides Chubba, Brock, 20, also has a sister in his life named Whittney Purdy. She is studying at Southeastern University. We can frequently see both of his siblings on his Instagram posts.

How good is Brock Purdy?

Brock Purdy has rocketed to the top of the all-time best quarterbacks list at Iowa State.

Brock Purdy attended Perry High School in Gilbert, Arizona and from there he played his high school football.