Arielle Lorre is the third wife of Chuck Lorre, a well-known American writer, producer, and director. Know more about her down below. 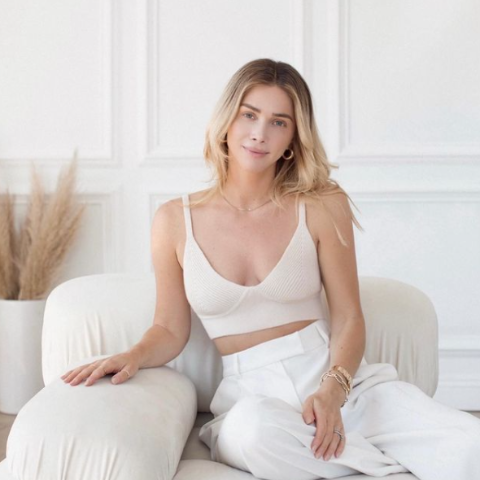 Arielle Lorre, formerly Arielle Mandelson, was born in the United States on August 3, 1985. She is the blog author who posts about cuisine, fitness, fashion, beauty, and travel. Arielle began her fitness journey in 2016 and still going strong as ever.

Lorre is 36 years old right now. Aside from that, the verifiable data about her schooling, the college she graduated from, her residence, parents, siblings, father, mother, and so on are kept private. Lorre’s zodiac sign is Leo, according to astrologers.

Arielle Lorre and Chuck Lorre were engaged in August 2017, married in September 2018, and started living together in their home in Los Angeles, California. They haven’t revealed how the two of them met or how they began dating each other. The couple has made numerous red carpet appearances since their weddings.

They attended the Golden Globe Awards in 2019 and 2020. Chuck makes frequent appearances in her journal. Aside from that, little is known about Arielle’s personal life, such as her parents, occupation, previous relationships, ex-boyfriend, etc.

Furthermore, Chuck married his ex-wife and business partner Paula Smith in 1979 and divorced her 13 years later in 1982. He then married his second wife, actress Karen Witteer, in 2000, and the couple divorced in 2010 after ten years of marriage. Chuck then dated Emmanuelle Vaugier, a Canadian model and actress, for two years, from 2010 to 2012. He married Arielle, his third wife, with whom he has a 33-year age difference.

Chuck Lorre is a well-known and award-winning American television writer, producer, and composer. He has created, written, and produced several popular American sitcoms for two decades, including ‘Two and a Half Men‘ and ‘The Big Bang Theory.’ His love of music drove him to drop out of the ‘State University of New York (SUNY Potsdam). Chuck soon made a name for himself as a guitarist and songwriter, touring across the United States.

The artist wrote several popular songs, including Deborah Harry’s radio hit “French Kissin’ in the USA.” During the early 1980s, he shifted his concentration to television. He wrote animation scripts such as the ‘DiC’ adaptation of ‘Heathcliff.’ He also created themes and music for several animated series, including ‘Teenage Mutant Ninja Turtles.‘

The producer began writing for sitcoms in the late 1980s.  Among the award-winning and critically acclaimed sitcoms he worked on as a creator, writer, and executive producer were Dharma & Greg, The Big Bang Theory, and Two and a Half Men. The ‘Chuck Lorre Productions’ vanity cards, which appear at the end of each episode of his productions and convey a new message each time, have become a characteristic of this exceptional show-biz personality.

Arielle Lorre’s Net Worth and Career

The artist is the founder of The Blonde Files Podcast, covering cuisine, fitness, fashion, beauty, and travel. She started her fitness adventure in 2016 with Kayla Itsines’ Bikini Body Guide, and in December of 2017, she submitted a trademark registration for The Blonde Files. The founder frequently promotes a healthy lifestyle and talks about body concerns, body acceptance, and self-love on her sites. Arielle is also a well-known social media influencer, with many followers on her YouTube and Instagram profiles.

The great majority of Chuck Lorre’s net worth has come from the syndication of shows he developed. The windfalls arise due to his ability to negotiate backend percentage equity points on the shows he produces. According to our estimates, Chuck made $20 million on Mike and Molly syndication sales.

The composer owned 10% of Two and a Half Men, and his 10% ownership share generated $200 million in syndication payments to Chuck. As you might expect, his most significant fortune has come from The Big Bang Theory. Chuck was able to acquire an unusual 20 percent equity stake in The Big Bang Theory because of the popularity of Two and a Half Men. He made $200 million when the show was initially being sold into syndication.

The television writer made another $200 million when HBOMax paid $1 billion to be Big Bang Theory’s exclusive streaming home. Add it all up, and Chuck has earned at least $650 million from syndication deals alone during his career. Since 2000, Chuck has been on an “overall” contract with Warner Brothers TV. During that period, he has earned at least $100 million in deal earnings. He has gained a small fortune from production fees and royalties received while his shows are being produced.

Chuck Lorre’s principal residence is a sprawling mansion in Los Angeles’ Pacific Palisades region, on the most sought-after street in the city. The property is a collection of properties bought throughout various deals, some of which were off-market. According to property records, he paid $2.6 million for the first parcel in 1995. Chuck hosted Barack Obama, a fundraiser party at this property in 2015.

The artist spent $9.5 million for an adjacent property in October 2020. The neighbor’s house was previously owned by a non-famous couple and was never listed for sale, so details are limited. However, according to tax records, the two-story classic was built in the 1930s and is substantial but not quite mansion-sized, with approximately 5,400 square feet of living area, four bedrooms, and five baths.

The property does not have a pool, but a large backyard patio, well-kept plants, manicured lawns front and back, and over-the-treetops ocean vistas. It’s hardly unexpected that Lorre wants to grow his real estate empire; his primary property has been undergoing significant repair and expansion for the past two years and is currently uninhabitable.