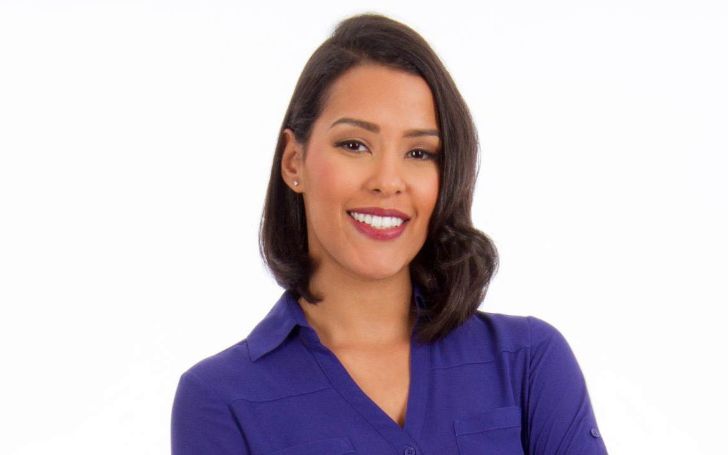 Anaridis Rodriguez is a beautiful journalist who serves as a reporter and anchor for WBZ-TV and CBSN Boston. In the past, she has the experience of fo working for The Weather Channel and WWLP-TV. Speaking about her marital relationship, she is a family person and has well balanced her private and professional life. So, let’s take a closer look at Anaridis’s life!

Who is Anaridis Rodriguez’s Husband? How Many Children Does She Have?

Anaridis Rodriguez is a married woman and is in a marital relationship with her husband Jesse J. Starnino. Her spouse Jesse is an assistant project manager for Bond brother in Everette, Mass.

The pair walked down the aisle on October 06, 2012, in the presence of their family and close ones. The wedding ceremony took place at St. Mark’s Church, Warwick, Boston, Massachuttes.

Almost eight years into their marriage, the two share an impeccable bond and live happily as husband and wife. From their relationship, the lovely couple is also parents and welcomed their first child, a son Andreas Starnino in 2014.

In January 2020, Anaridis gave birth to her second child Sebastian Alberto Starnino. She also shared the joyous moment on her Instagram. She often shares pictures with her kids on her social media.

As a journalist, she is occupied with her job most of the time, but the former WWLP-TV reporter likes to spend her off-days with her partner and children.

Anaridis Rodriguez has a networth of $600,000 from her career as a journalist. By contrast, American reporter and anchor Jacqueline Policastro has a net worth of $2 million.

As a reporter and anchor, she’s worked for a few news channels in her career. She began her professional life working for WWLP-TV in Springfield, Massechuttes. After that, she served as a news anchor and correspondent for Atlanta based news company, The Weather Channel, for three years.

Check out the clip of Anaridis Rodriguez reporting weather!

Rodriguez joined WBZ-TV in April 2017 and has been working as a reporter and anchor since then. Likewise, she anchors CBS Boston’s WBZ-TV weekend morning news.

Anaridis Rodriguez was born in Santo Domingo, Dominican Republic. When she was 12, her family emigrated to Providence, Rhode Island. The veteran anchor’s mother is Ana Rodriguez, and her father is Juan Rodriguez.

The lady did her Bachelor’s Degree from Rhode Island College, majoring in Communications. Furthermore, she also has a Master’s Degree in Broadcast Journalism from Emerson College.

During her time at WWLP-TV, she covered major news and events such as the impact of Tropical Storm Irene in Western Massachusetts, the heroin crisis in the Pioneer Valley, and the Boston Marathon Bombings.