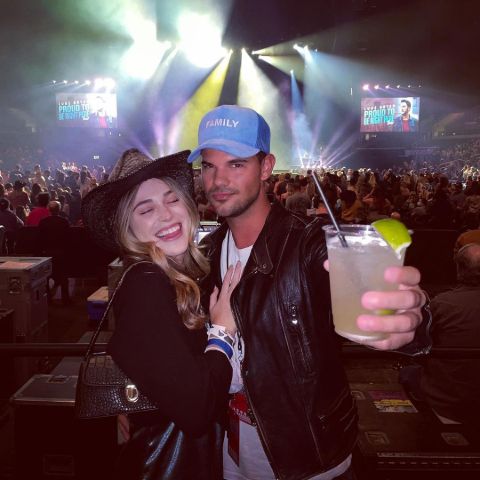 Twilight‘s Taylor Lautner, everyone’s favorite werewolf, has announced his engagement to long-term partner Tay Dome. He dropped down on one knee in a room decorated with red rose petals, candles, and a red neon sign, and the couple both shared beautiful images of the scene on Instagram. “11-11-2021. And just like that, all of my wishes came true,” Taylor wrote.

On the other hand, Tay, a registered nurse, captioned her photo on Instagram: “my absolute best friend. I CANNOT WAIT TO SPEND FOREVER WITH YOU“. Both have uploaded a similar picture. “Got news for you, the feeling is mutual,” Taylor wrote in response to her post. Their celebrity acquaintances were overjoyed to congratulate them and express their joy for the newly engaged pair.

Nikki Reed, Taylor’s Twilight co-star and Rosaliein the series, wrote: “Oh my goodness! This makes me want to cry! Wow!! Congrats to you both.” Congratulations to both of you.” Patrick Schwarzenegger, star of Grown Ups 2 and Midnight Sun, added his two cents: “I’M SO HAPPY FOR YOU! LOVE YOU. And yes, I’ll be the flower boy.“

Furthermore, Fans quickly pointed out that if Dome decides to alter her name, they’ll both be known as Taylor Lautner. When the actor dated Taylor Swift, who released her new edition of album Red the day before the Taylors announced their engagement, this was laughed about. In summary, Taylors are having a terrific week.

The partners have been dating since 2018 and made their relationship official on Instagram shortly after. This month, he wasn’t the only Twilight celebrity to get engaged. Kristen Stewart, who plays Princess Diana in the forthcoming biopic Spencer, got engaged to her two-year boyfriend Dylan Meyer last week.

On The Howard Stern Show, she announced the news, saying: “We’re marrying, we’re totally gonna do it. I wanted to be proposed to, so I think I very distinctly carved out what I wanted and she nailed it. We’re marrying, it’s happening.”