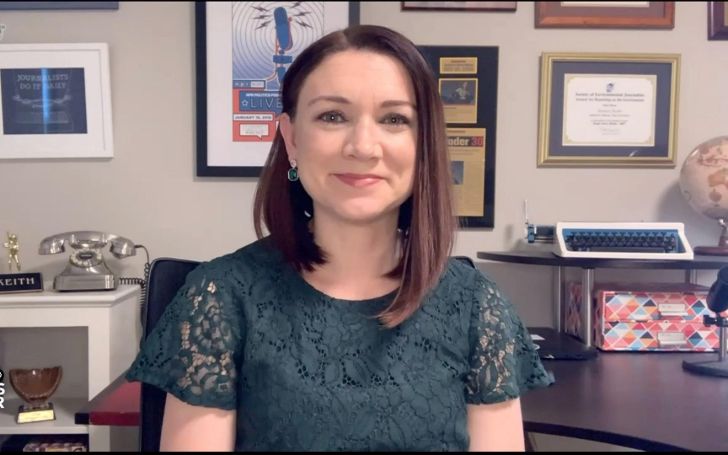 Being a journalist isn’t anyone’s cup of tea considering the pressure and responsibility that comes with it. Despite all the hardships, Tamara Keith is someone who makes all the tasks look like a cakewalk. She remains a perfect example of an empowered woman that represents NPR as a White House Correspondent. Interestingly, she isn’t just limited to that as Keith is also the co-host of the NPR Politics Podcast alongside Scott Detrow. So, today we take you close to the net worth, career, and married life details of the charismatic journalist.

Speaking about the finances and income status of Tamara Keith, she has nothing to worry about, thanks to her stable career as a political journalist. Specifically, she amasses a whopping six-figure net worth of $500,000 as of 2020. With such large net worth, Keith enjoys a lavishing lifestyle around modern amenities.

The 40-year-old still has a lot of good years to offer in the journalism industry, which means that her net worth is bound to grow. Well, the day isn’t far when it will touch the $1 million mark. As per estimates. she earns around $127,748 per year, which is the average salary of a NPR correspondent.

The introduction of Tamara Keith would be incomplete without mentioning her as a NPR White House Correspondent. Besides that, she is also the co-host of the hit NPR Politics Podcast with Scott Detrow. Initially, she joined the network as a business reporter and immediately pushed the ranks to the top.

Over the years, she covered some intriguing stories like the Earthquake in Haiti, the final two years of the Barack Obama presidency, and Hillary Clinton‘s 2016 presidential campaign. The inspiring diva also hosted ‘B-side Radio,’ a 72-episode public radio podcast from 2001 to 2010. She regularly appears on the PBS NewsHour weekly segment ‘Politics Monday’ and is on the board of the White House Correspondents’ Association.

Tamara Keith might be vocal about her professional endeavors, but she remains very secretive when it comes to her romantic side. Interestingly, she is a married woman to husband Ira Gordon. Although she didn’t disclose how she met her beau or tied the knot, we do know that her spouse is a cancer researcher and veterinarian. Surprisingly, she converted to Judaism, which is her husband’s religion. The married couple recently welcomed a child into their family.

Talking about Keith’s background, she was raised Methodist. As an eight-year-old, she and her family moved to Hanford, California, where she grew up. Interestingly, she started in radio as a ‘teen essayist’ for NPR’s news magazine program ‘Weekend Edition Sunday.’ As per education, she completed her bachelor’s degree in Philosophy from the University of California, Berkeley, in three years. Later, she went to the same university to study journalism. Shortly after graduating, she worked for networks like KQED, WOSU-FM, and KPCC before making the big break at NPR.

You May Like: The Net Worth and Personal Life Details of Eliana Johnson.