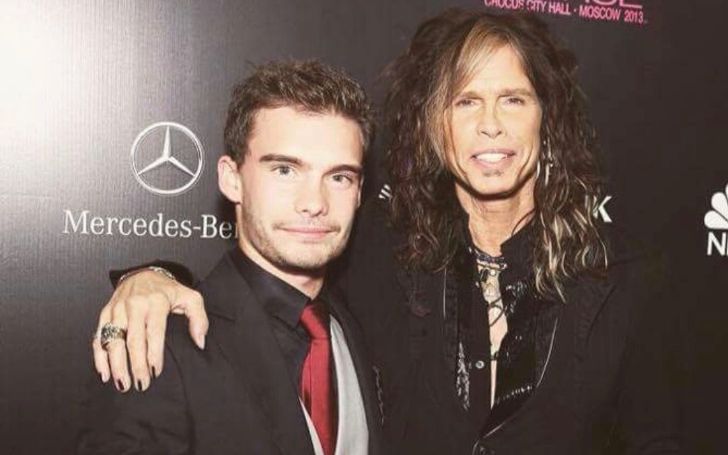 Taj Monroe Tallarico is a former short-time actor who played in an episode of Disney Kids Channel show Lizzie McGuire. But that is not how he came to people’s attention. It is because of his celebrity dad, who happens to be legendary American singer and songwriter Steven Tyler. Let’s get to know all about him in this article.

Like already mentioned, Taj Monroe Tallarico is the son of Steven Tyler and Teresa Barrick. His mom is an American clothing designer while his father is a singer known as the lead singer of Boston-based rock band Aerosmith.

The celebrity child’s parents married on May 28, 1988, in the presence of their close ones. The wedding ceremony took place in Tulsa, Oklahoma. Tallarico also has an older sister Chelsea Tyler who is a professional singer.

Though the marriage with his mother was not the first for his father as the Dream On singer was in a marital relationship with model Cyrinda Foxe.

The two tied the knot on September 01, 1978, and remained together for nine years until their divorce 1987. Taj has two half older sisters Live Tyler and Mia Tyler. Both of his siblings are popular American actresses.

It might be hard to imagine but Taj has a great relationship with his father and sisters. Moreover, he attended an event with family at David Geffen Hall on May 2, 2016, in New York City.

Despite his father worldwide fame, Taj Monroe Tallarico lives a low-profile lifestyle. He is also secretive about his life, and little has been learned about him. But it appears he is a married man.

Going through his only social media presence, which is on Facebook, which says he is in wedlock with Brittany Tallarico. The duo walked down the aisle on October 27, 2018.

The Lizzie McGuire actor, however, is not much active on his Facebook as well, so his current lifestyle is under wraps. Furthermore, whether he has any children with his spouse is also in the dark.

Many are curious as to what Taj Monroe Tallarico does for a living, but the fact is no one really knows for sure. Therefore, his net worth is under review.

But his old man Steven Tyler is one of the distinguished figures in the American music industry. The Toys in the Attic hitmaker holds an incredible net worth $130 million from his glorious career.

Furthermore, the 72-year-old owns houses in Massachusetts and Lake Sunapee. Being one of the heirs, Taj must have got some portion of his father’s fortune.

Talking about Tallarico’s acting works, his only performance was in the series Lizzie McGuire in 2002. In the American sitcom series, he played a minor role of a bystander.

If you want to read a similar celebrity article, be sure to check out Featured Biography!