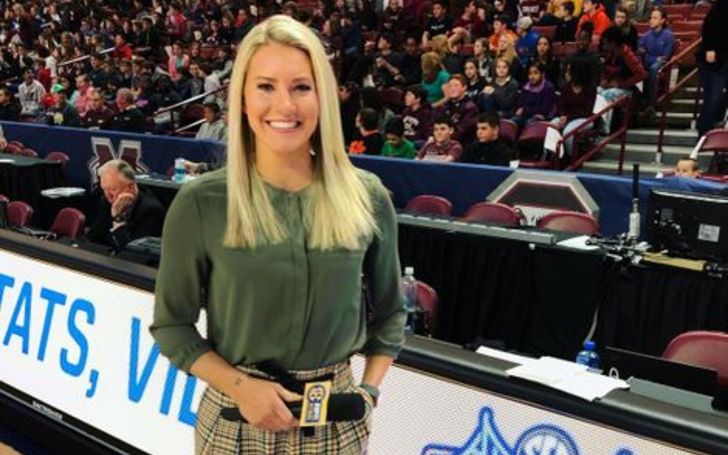 Steffi Sorensen is an American sports reporter and analyst who is currently working for ESPN. She was a college basketball player as played professional basketball in Europe for a short time. In her spare time, she also works as a trainer. If you want to know more, stick with us till the end of this article.

Is Steffi Sorensen’s in a Relationship With Anyone?

Steffi Sorensen has never married in her life and also not in a relationship with anyone, which hints that she is single right now. She has never come out to the public and spoke about her love life. Scrolling through her Instagram, she is close to many male guys, but no one seems to be her lover.

The former FOX Sports reporter is fond of kids and often posts pictures with her sister’s baby on social media. She might fancy having her own one day!

Steffi is most of the time busy with her job, though, in her off days, she likes to spend time with her family, friends, and close ones. A fitness fanatic, she hits the gym regularly and intakes a healthy diet for her fitness. No wonder she has a great body.

Steffi Sorensen has a net worth of $1 million from her many years of career as a reporter, sports analyst, and commentary. She is also a personal trainer and fitness model and previously worked as a trainer at Baileys Powerhouse for a year.

Check out the clip of Steffi Sorensen doing a post-game interview!

The 1.78 meters tall lady has worked as a journalist for a while now and starting working as a commentary for ESPN. While working for ESPN, she also began working for FOX Sports in July 2014 as a sideline reporter.

At the moment, the former athlete is working as a sideline reporter and NCAA basketball analyst for ESPN. It is safe to assume, Sorensen receives a hefty paycheck form her work.

Steffi Sorensen was born on March 29, 1988, in Jacksonville, Florida, United States. She grew up with her sister Brittany Sorensen and an older brother. Her brother started playing basketball at a young age, which played a huge role in choosing the sport.

The 32-year-old lady studied at the University of Florida and graduated with a bachelor’s degree in science and telecommunications management in 2010.

During her college, she won Miss Florida Basketball 2006. She is also Most Valuable Player on the women’s basketball team in her senior year.

The female sports commentator played one-year professional basketball in France before she began working as a sports journalist in 2010.

For a more similar celebrity biography, be sure to check out Featured Biography!