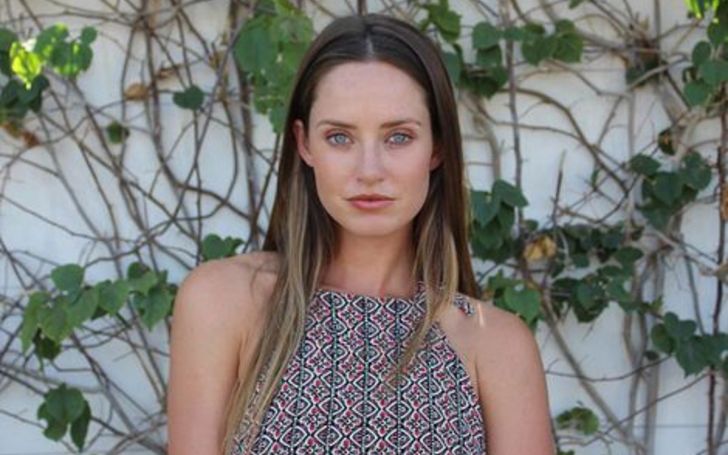 Merritt Patterson is one of Hallmark’s favorite actresses and has been acting since she was only 15. The Canadian beauty made her name among the audience from her performances on screen works like Ravenswood, The Royals, The Art of More. Want to know more about her, go through this section to know more.

Is The Beautiful Merritt Patterson Dating Anyone?

Merritt Patterson is currently in romantic chemistry with her boyfriend, Jr Ringer. Other than his name and frequent appearance on social media, not much has been known about her lover.

The Art of More star began dating Ringer in 2017. Since then, the two has been in a lovey-dovey without any strife in their relationship.

Patterson does not hide the fact she is dating a guy and often displays PDA moments pictures with her beau on her Instagram. The lovers are relishing their life to the best they can. The announcement of the engagement and maybe even the wedding is not too distant.

The Hallmark actress is usually bustling here and there for her work. However, in her off-days, she loves traveling to exotic and adventurous places with her family and friends.

Merritt Patterson has a net worth of $1 million from her successful career as an actress. Over the years, she’s played in many movies and television.

The 29-year-old made her name from Ravenswood in which she was one of the main cast members and played the role of Olivia Matteson. In the ABC Family series, she played alongside Nicole Gale Anderson, Tyler Blackburn, Steven Cabral, Brett Dier, and Luke Benward. The show was the first spin-off of hit-series Pretty Little Liars.

Check out the clip of Merritt Patterson talking about her series Ravenswood!

Another of her popular performance was in teh American soap opera The Royals. She portrayed the character of Ophelia Pryce. Likewise, she starred as one of the main characters in season one of the show while she featured as a guest in the second season.

During her time in the show, she worked with actors like Elizabeth Hurley, William Moseley, Alexandra Park, Tom Austen, Jake Maskall, and many others.

Merritt Patterson was born on September 02, 1990, in Whistler, British Columbia, Canada. Her father is Dave Patterson. In an interview, the Forever in My Heart actress looks up to her parents and considers them her role model in her life.

The 1.65 meters tall lady has a sister Mackenzie Patterson. When she was fifteen years old, she got the opportunity to act in a commercial for the Roger Touch Phones. Merritt made her acting debut in an episode of ABC Family sci-fi series Kyle XY in 2006.