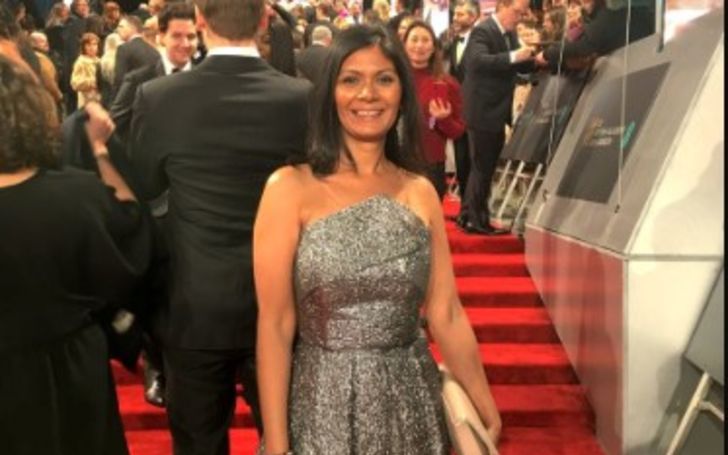 Meneka Das is an Indian-British actress who is known for her works in Lu Lune Folle, Another Year, and Bohemian Rhapsody. Apart from acting, the talented lady has tried her hands in directing, writing, producing. Some of her works behind the camera are The Songs Within Me, Little Box of Sweets, The Audition, etc. For more about her, scroll down the section below!

To the surprise of many, to this day, Meneka Das is not married. Furthermore, she does not seem to be in a romantic relationship with anyone and is likely single.

The Girl in the Cafe actress is not a social media junkie and has only a few pictures on her Instagram. However, she has never hinted about her romance or lovey-dovey with anyone.

As talented as she is, Das might have chosen to stay single till now. Well, to each their own! At the moment, Das is living with her family and close ones in London, UK.

Meneka Das holds a net worth of $500,000. She accumulated her wealth from many years in the field of acting, directing, producing, and writing.

Among her many acting roles, the 1.65 meters tall celeb is famous for her role in the Emmy Award-winning movie The Girl in the Cafe, directed by English filmmaker David Yates. Likewise, she was one of the main cast members and portrayed the character of an Indian lady Sunita. The film also starred Bill Nighy, Kelly Macdonald, Anton Lesser, Paul Ritter, and Ken Stott.

In 2018, the female filmmaker appeared in the movie award-winning biographical film Bohemian Rhapsody where she played Freddie Mercury‘s mother, Jer Bulsara. Similarly, she got the chance to work with Rami Malek, Lucy Boynton, Gwilym Lee, Ben Hardy, Joe Mazello, and many others.

Meneka Das was born on May 03, 1976, in Mumbai, India. She studied acting at the Lee Strasberg Institute and the Ivana Chubbuck Technique.

The 44-year-old made her acting debut in a television movie It Could Be You in 1995. She studied screenwriting with award-winning writer Jan Hartman. Her acting agent is John Setrice and is represented by MacFarlane Chard: Literary and Talent Agency.

Meneka directed, wrote, and acted in the short romance movie Little Box of Sweets, which released in 2006.