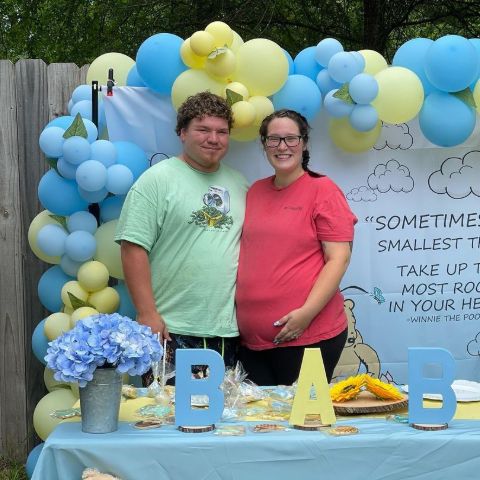 Lauryn “Pumpkin” Shannon, daughter of reality TV star Mama June Shannon, and her husband Joshua Efird have had their second child, a son called Bentley. On Wednesday, Shannon announced the happy news through Instagram. “After being admitted into the hospital last night at 2-3 centimeters with heavy contractions our baby boy has finally made his debut. Everyone meet Bentley Jameson Efird weighing 7 pounds 10 ounces“, she wrote.

The reality star said that she is expecting her second child with Efird in early April. With a series of photographs showing numerous positive pregnancy tests and ultrasound images, the delighted mom announced the news on Instagram. She penned, “Well the secret is out for everyone to know now!! Baby Efird #2 coming 2021 After (with heart emoji) almost 3 years we are finally having another blessing and couldn’t be happier.“

Shannon told PEOPLE that she and her husband found out they were pregnant in November, despite sharing the news with fans in April. While they are “excited” to become parents of two, the reality TV personality confessed that it is “nerve-wracking” in the exact phrase. Shannon told the magazine, “was definitely a shock because we had been trying and I’ve been buying pregnancy tests and they kept coming back up negative.”

Also See: Ree Drummond and Husband on A ‘Marital Vacation’ To Colorado

Shannon, who is also the legal guardian of Alana “Honey Boo Boo” Thompson, her younger sister, has recently declared her wish to leave reality television behind. During an interview with Entertainment Tonight, Lauryn expressed her apprehension about shooting such sensitive episodes from her life, such as her mother’s fight with addiction.

“It is hard… because I’m also testing to deal with it personally, and then I’m also having to film it,” Lauryn said of filming the different reality shows, including the most recent one, Mama June: Road to Redemption. She added, “Even on this season, it’s kind of hard because going back to the past kind of puts tear and wear, not only for me, physically, but mentally. I don’t want to go backwards into that mental place that I was when my mother was into her addiction and me having to step up and do all the things that I was doing and not really taking care of myself.”

Lauryn said, “I feel like I’ve moved on from the reality television lifestyle because I’ve put in a lot of effort in terms of my own personal well-being.” She added, “At this point, I really do feel like I have worked hard as a woman, [done] therapy, and really working and taking this time for myself and for my family. I honestly just kind of loathe going back to the past.”