Kylie Cantrall is a singer, Youtube star, and actress notable for her leading role in Gabby Duran & The Unsittables. Please keep reading to know more about her. 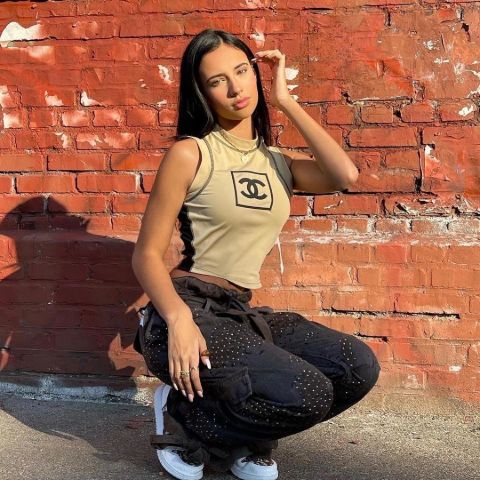 Is Kylie Cantrall Dating Anyone? Is She Single?

Most Kylie Cantrall fans are aware of her love life. At a young age, it’s not surprising that the attractive actress is not married. Further, she has decided to keep her relationship details private. There is currently no confirmation or evidence about her boyfriend or life companion.

One of the main causes for her single existence could be her blooming career. At present, Cantrall may be more concerned with her profession than with personal matters and prefer to save the romance later in life. She is regularly seen with her co-stars. Despite that, the actress isn’t currently dating anyone.

You may also like: Net Worth, Relationship and Wiki Details on Journalist Colleen Wolfe

Ever since Kylie came into the limelight, she appears to be enjoying her single status or secretly looking for a perfect life partner who could be her boyfriend or future husband.

Kylie Cantrall’s Acting Career Highlights & Net Worth as of 2021

The networth of Kylie Cantrall is under examination, although some sources estimate it to be more than $500,000. Her main source of income is her professional vocation as an actor, Youtuber and Dance tutor. Kylie has worked in the entertainment industry for quite some time now and has appeared in numerous television shows. The artist didn’t reveal her actual wage, although the average annual salary for an actress is $80,720.

Kylie Cantrall became a Youtube sensation with her web series ‘ Hello Kylie‘ as she grew up. She hosted major guest stars like Matty B, Jordyn Jones and Pentatonix. Her career eventually began when she amassed more subscribers, making her well famous.

Before transitioning to television, the native of Tarzana, California, released some of her music like ‘No Reason,’ ‘ That’s What I’m Talking Bout,’ and ‘Feeling Some Kind of Way.’ The 16 years old got her first acting role on the Disney Channel Series’ Bizaardvark‘ as Paige’s sister and in 2017 as Jasmine on ‘Raven’s Home.’

In the series Gabby Duran & The Unsittable, the teenage actress plays Gabby Duran, a girl who lands a job babysitting a group of VIP extraterrestrial children disguised as everyday kids. On the show, she appeared from 2019 to 2021 alongside Coco Christo and Callan Farris. Ron’s Gone Wrong and The Toycracker: A Mini-Musical Spectacular are her other films.

Kylie Cantrall was born on June 25, 2005, as Kylie Lorena Cantrall to her American parents in Tarzana, California. The 16 years old is proud of her Venezuelan heritage and American nationality. She has a good physical shape and stands at 4 feet 11 inches.

Further, Cantrall has black eyes, brown hair. Besides, the young star likes shopping for vintage clothes that reflect her unique style. In her free time, she enjoys singing, dancing and visiting family. The starlet also rocked some cool looks on the red carpet, as seen on her Instagram handle.