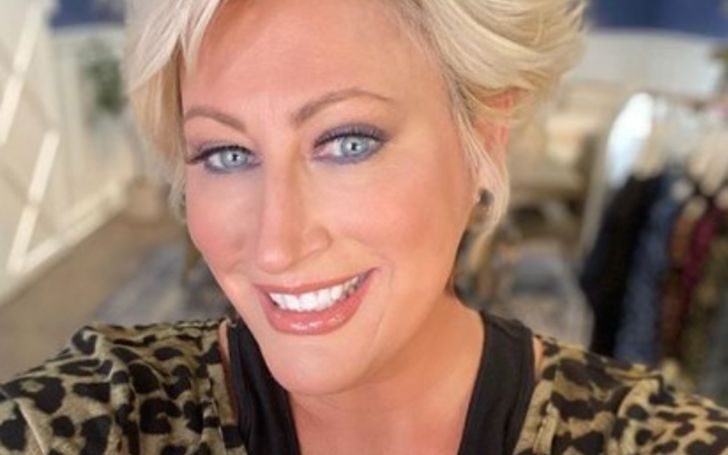 There are several things to pinpoint who Kim Gravel is. First and foremost, she’s a television personality. She’s the star of the reality show Kim of Queens. Further, she worked on many other successful projects. She also serves the popular show The Steve Harvey Show as its contributor. Then, she’s also a businesswoman, creator of Belle, by Kim Gravel on QVC. Furthermore, she was Miss Georgia in 1991, and thanks to her beauty pageants’ expertise, she is worshipped by pageant contestants. Apart from that, she’s a gorgeous wife and a lovely mother. More details on her will be explicitly explained in this article, so to learn it all, stay tuned till the end.

The Kim of Queens star Kim Gravel holds a staggering net worth of $4 million as of 2020. She succeeded in garnering an impressive fortune from her fruitful career history.

Kim’s financial activities aren’t accessible to the public eyes; however, her luxurious life does flashes all over the media. Thus, even though her actual earnings aren’t revealed, it’s pretty clear from her years of hardship, she acquires lavish wealth to boost her living standard.

Speaking of Kim’s career, as we pointed out earlier, she is involved in many fields and garners exceptional success, which led her to massive popularity.

In her early days, Kim was into the music industry. She was the lead singer and songwriter of the recording group named Beloved, as noted by Earn The Necklace.

In 1991, Kim participated in the Miss Georgia pageant. She was only 19-years-old then, and after she won the competition, she became the youngest one to win that title. Subsequently, with a delightful beginning, she then represented her home state in the Miss America pageant. With her exceptional work, she got an offer to become a U.S. Goodwill Ambassador to Japan.

Talking about her television appearance, she began to act in 2014. In that year was handed two projects. She played as a waitress in the TV series Drop Dead Diva. Further, she’s starred on the Lifetime reality show, Kim of Queens. We can see her life as a beauty pageant coach training young girls for pageants on that show.

As an entrepreneur, the 49-years-old diva earned quite a success in the beauty line. She is the owner of the company, Belle Beauty, by Kim Gravel. Similarly, like in cosmetics, she’s also into a clothing line, providing the best apparel for women. Further, she also offers beautiful jewelry on the official website of QVC.

With her years of experience, Kim even became a certified life coach, advisor, and consultant.

Born on August 5, 1996, to Brooks and Jo Hardee, Kim Gravel isn’t only lucky in her professional career, but she’s equally fortunate in her personal life. Indeed, unlike many celebrities, she managed to preserve her married life with her husband for a long time. They are together for around two decades now.

Kim is married to her beau Travis Gravel. The beautiful couple got married on August 16, 2000, according to Just Richest. Since then, they are together as husband and wife.

The Kim-Travis duo gave birth to two handsome sons, Beau and Blanton Gravel. Beau is the eldest one born in 2010, whereas Blanton is the youngest, who was born in 2012. Their children are growing up in an excellent environment in Atlanta.

Who is Kim Gravel’s husband?

A former model Travis Gravel is the husband of Kim Gravel.

Where is Kim Gravel now?

Why was Kim of Queens Cancelled?

Despite the massive popularity of the show, Kim of Queens, it gradually lost its ratings which led to cancellation; luckily Lifetime hopes to continue to to work with Gravel in the future.