Katie Price, known previously by pseudonym Jordan is an English model, businesswoman, and media personality. Price came to the limelight in 1996 after her glamour modeling work with frequent appearances on Page 3 in British tabloids. 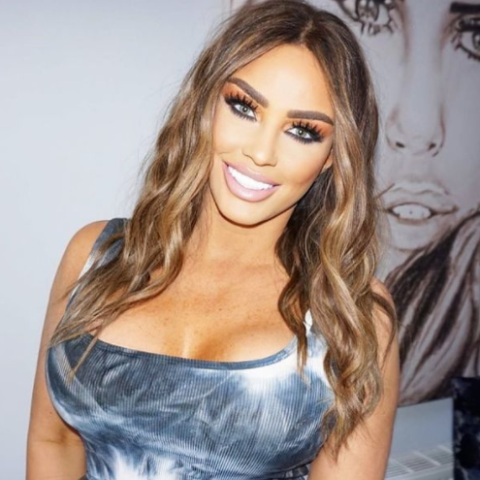 The former Love Island star Carl Woods and Katie Price were friends for years, but they’re set up with five by a mutual friend since June 2020. She described him as her Prince charming. Sources claim that Carl has been by Katie’s side throughout her ordeal with ill son Harvey and hit back at online trolls.

The blonde beauty wasn’t looking for love or a serious relationship until she fell head over heels for Carl. Even more, Carl Woods revealed he was a huge fan of the former glamour model, Katie, since he was a teen. Believe it or not, Carl is 11 years younger than his fiancee Katie Price.

Katie Price was previously in a relationship with a man named Kris Boyson. She split with her ex-partner in 2019. On 21 April 2021, Katie Price,42, engaged for the 7th time with toyboy Carl Woods. In addition to that, the ex-glamour model announced on 20 April her soon-to-be fourth husband had proposed to her after 10 months of dating.

Following the ceremony, Katie showed off her engagement ring in a photo posted on both her and Carl’s Instagram with the caption “I said yes”. Katie’s divorce from her third husband and ex-stripper Kieran Hayler was made official last month. They parted separate ways after five years of marriage in 2018 when Kieran cheated with their nanny.

Price first got engaged to former Gladiator Warren Furman in 1997. Later, she tied a knot to Peter Andre from 2005 to 2009 and cage fighter Alex Reid from 2010 until 2012. And, for eight months, Katie got engaged to Argentine model Leandro Penna. Soon after that, she was romantically linked to fitness instructor Kris Boyson in July 2019, before their 19-month-old relationship ended in December 2020.

Carl once revealed that Katie’s former nemesis Jodie Marsh was his celebrity crush because she visits the same tattooist as him. Carl wants a girl who can laugh at herself by equally someone who acts like a girl. The reality Tv star also added, he would love a girl who could look like Jodie Marsh, and it would be amazing.

How Much is Katie Price’s Net Worth?

Katie Price summoned a net worth of $1 million from her career as a glamour model. She is best known for her time as a topless female glamour diva in the British tabloid newspaper The Sun. Sources believe, her rise to fame through this exposure under the name Jordan earned media attention for having her breasts surgically enhanced.

Back in the 2000s, there’s a rumor Katie’s wealth topped $40 million at the peak of her career. In June 2019, her finances were in such ruination that she was forced to file for a bankruptcy debt restructuring which a British court granted.

At that time, dozens of creditors lined up to seek repayment of debts owed by Ms. Price. And, as per bankruptcy repayment, Katie Price repaid what she owed at somewhat reduced levels. She allegedly owed millions in taxes as well.

Her fiance Carl Woods owned a car dealer in Essex. Indeed, the brown-haired owns 30 cars, including a Lamborghini, before entering Love Island. Speaking of fame, Carl Woods gained popularity after he appeared on Love Island back in 2016.

On 29 April 2021, Carl Woods brought an £800,000 real estate for the TV star and her kids after their mucky mansion makeover. The 42-year-old is currently renovating the property and plans to reside there with Katie when it is completed.

Until then, Carl and his sweetheart will live at his new stunning Essex pad, which he will later rent out in the hopes of turning it into a business venture. A spokesperson reported to Sun; Carl is looking for an investment property to rent out after the pair shift to Katie’s home in Horsham.

Source added, Carl is purchasing the house intending to rent it out in the future. Nevertheless, while the work is being done on Katie’s £2m Mucky Mansion, the family will be staying there. Carl has put in an offer and is hopeful he’ll accept it.

The huge property has been well renovated ahead of their move and comprises three reception rooms, five bedrooms, and two bathrooms. The family was previously living in another of Carl’s properties in Essex. However, he recently sold the place for £445,000 before buying the new home.

Katie and her kids lived with Carl – while they weren’t with their fathers -after a flood-damaged family home. The family was previously living in another of Carl’s properties in Essex. However, he recently sold the place for £445,000 before buying the new home.

Katie Price was born Katrina Amy Alexandra Alexis Infield on May 22, 1978, in East Sussex, Paddington Brighton, England. She holds a British nationality and belongs to mixed ethnicity. She was the one child of Amy Charlier and Ray Infield. Price’s father left her family when she was four. So in 1988, her mom remarried builder Paul Price. Katie has an older half-brother Daniel and a younger half-sister Sophie. Katie Price is of Italian, Spanish, English well as Jewish descent from her maternal grandmother.