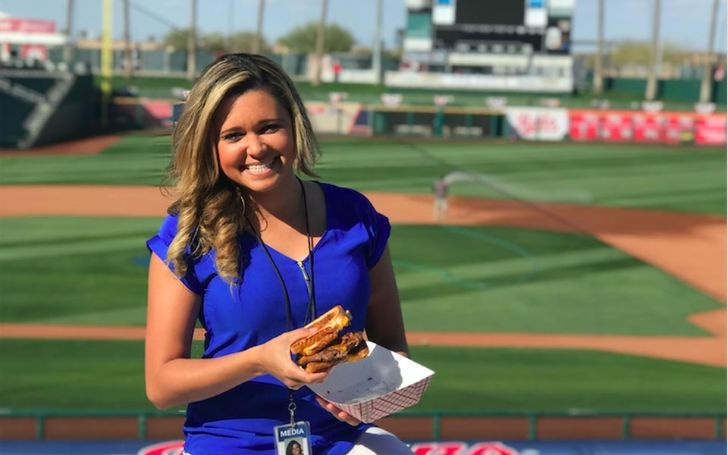 Kari Steele works as a digital video beat journalist for ABC15 Arizona. At ABC15, she is a digital video beat journalist where she produces YouTube videos for ABC and covers sporting news and events. Boasting an immense experience in a few years of her career, she knows her work very well. In her profession, she has interview sports personalities like Kareem Abdul-Jabbar, Magic Johnson, Don Mattingly, and many others. Let’s talk in detail about her in this article below!

Is Kari Steele in a Romantic Link-Up With Anyone? How is She Living?

Kari Steele is likely single and not in chemistry with anyone right now. Active on social media like Facebook and Twitter, she has never posted anything where she indicated her followers that she is in a relationship with anyone.

The former CBS News news producer looks focused on her rising career, and nothing seems to disrupt her concentration. It might not be that she is not interested in love life, but she might be saving that for later in her life.

While often remaining busy doing her work, she likes to spend her time with her family and friends. Kari is a big-time foodie and loves making food and travel on her spare time.

The female journalist is an avid animal lover and has a pet dog, Colt. She posts pictures and videos of her lifestyle on social media.

Kari Steele’s Net Worth And Career in Journalism

Kari Steele has a net worth of $1 million from her career as a journalist. She is someone who possesses an incredible amount of expertise as a result of a year of toil in the field.

In her flourishing career, she’s worked for many prestigious news channels. She served as a digital news producer at WMAZ-TV, a CBS News affiliated news company located in Macon, Georgia. Before that, she was a social editor for the National Football League (NFL) for seven months.

Steele, in addition, worked as a sports producer and content editor for Yahoo! Sports for about a year. Likewise, she was a host and a reporter for Collegiate Golf Alliance at Greater Los Angeles for three and a half years.

Check out the clip of Ballpark food reporter Kari Steele reporting her work!

At present, she is a digital video beat journalist at ABC15, Arizona. She joined the Phoenix, Arizona based channel in November 2015. Because of her peculiar love for food and her way of interviewing sports team and fans, Forbes’ Andy Frye nicknamed her “Ballpark Food Sherpa.”

Kari Steele was born in Phoenix, Arizona, while she grew up in Los Angeles, California, United States. The talented journalist has a younger brother who is a professional baseball player in the San Francisco Giants Organization.

While at college, she worked as a salesperson at Landry’s Sporting Goods for a year and a month. She served as a office assistant at Hawaii Pacific University’s Athletic Office. From 2010 to 2012, she was a video correspondent at USCFootball.com.

Steele interned for ESPNLA 710, working as a producer’s assistant. Besides, she volunteered as a assistant coach at the Univeristy of Southern California’s Softball Team for a month in October 2013.

If you want to read similar celebrity articles, make sure to look at the Featured Biography website!