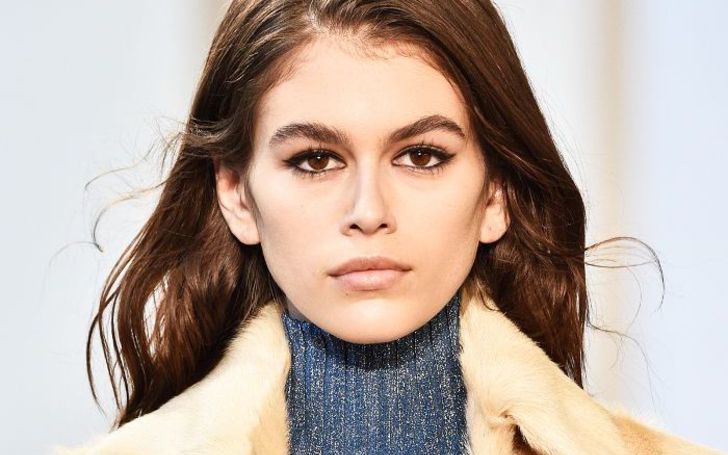 If you don’t know about Kaia Gerber, then are you even up to date with the modeling world? Well, to solve your query Kaia is the daughter of supermodel Cindy Crawford and entrepreneur Randy Gerber. Having debuted at the age of 10 for the Versace Junior line, she’s already hit milestones in her career walking for brands like Alexander Wang, Marc Jacobs, Burberry, etc. So, let’s get to know more about the model from her love life, net figure, to her hit career.

Starting her career at the age of 10, it’s quite hard to believe that Kaia Gerber’s actively began her professional modeling career since 2018. She’s already established herself as a talented young lady working in the path of her mother, Cindy Crawford.

Only two years in her career, the supermodel’s already made quite the big bucks for herself. Explicitly speaking, according to Celebrity Net Worth, her net worth collection is excepted to be a massive $3 million as of 2020. It might not be much compared to her father, Rande Gerber‘s total asset of $500 million, and her mother’s of $100 million, but it’s still a tremendous amount for a teenager.

The 19-year-old makes most of her earning by walking for high-end brands and shows like Louis Vuitton Prada, Chanel, Fendi, Marc Jacobs, Burberry, Alexander Wang, Moschino, Saint Laurent, Alexander McQueen, and many more. Besides that, she also earns a significant amount from her brand endorsements.

Cindy Crawford’s daughter is definitely not shy when it comes to her personal life and relationships. She seems to be embracing it head-on while loving flaunting her boyfriends in front of the media. As for her dating history, Kaia previously dated the 26-year-old comedian Pete Davidson. The couple only went out for three months and, in those times, were known for their open PDA.

The teenager is currently dating Australian actor Jacob Elordi. They confirmed their relationship by heading out in New York City while holding hands with each other. Elordi was previously known to date Zendaya just before Kaia came into the picture.

The teenage model, Kaia, made her runway debut back in 2017 from Raf Simon’s Calvin Klein. After that, she was introduced to several fashion houses and could be seen actively walking for brands like Marc Jacobs, Coach, Prada, Chanel, Fendi, Burberry, Bottega Veneta, Michael Kors, JW, Longchamp, Tom Ford, Saint Laurent, Versace, and many more.

To date, Gerber’s been on the cover of fashion magazines like Teen Vogue, The Love Magazine, Pop Magazine, Vogue Paris, Vogue India, Vogue Japan, Vogue Italia, Vogue Netherlands, and many more. In 2018, she collaborated with Karl Lagerfeld and created her first collection named Karlxkaia.

For more reads on your favorite stars, stay tuned with us at Featured Biography.