Skip to content
Home » Entertainment » Jameela Jamil is in a Relationship With James Blake, Know about her Current Controversy

Jameela Jamil is in a Relationship With James Blake, Know about her Current Controversy 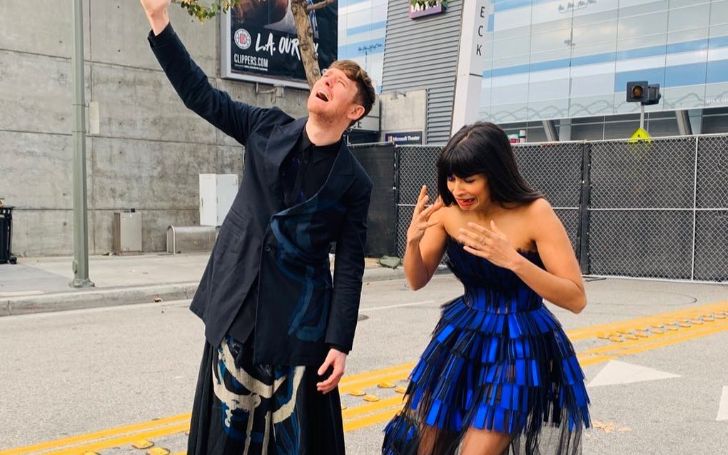 Jameela Alia Jamil is an American actress, presenter, and campaigner. She started her career on Channel 4, where she anchored a T4 strand pop culture series from 2009 until 2012. In addition, Jameela became the radio host of The Official Chart and co-host of The Official Chart Update on BBC Radio 1 with Scott Mills. She was the BBC Radio 1 chart show’s first solo female presenter.

James Blake Litherland is a London-based singer, songwriter, multi-instrumentalist, and record producer. He rose to prominence with a series of 2010 E.P.s, including CMYK and Klavierwerke, and his self-titled first album was met with critical acclaim in 2011. It’s no secret that Jameela and James have had a long-standing relationship. On the other hand, the dynamic duo has kept their relationship under wraps, allowing fans only brief peeks of their connection on their own terms. So, let’s learn more in detail.

In 2015, the actress from A Good Place began dating the Grammy winner. They initially met at the old workplace of the body-positive activist, where she worked as a D.J. at BBC Radio 1. Surprise! With a romantic post on December 31, 2015, Jamil and Blake chose to make their romance Instagram official as they celebrate their one anniversary.

Although the couple normally avoids public vows of love, there have been times when the L.A. transplants from the United Kingdom have spoken about their relationship. In a 2016 interview with Time Out New York, Blake revealed the relationship. “I believe meeting someone who was much more open than I was, and lot more confident than I was helped me become more open,” he stated at the time. “It aided me in stepping up to the plate.”

The I Weigh founder hasn’t revealed much about her dating life before Blake, but she did confess in a Cosmopolitan U.K. piece in May 2015 that she “came in love with a man before discovering he was married.” She then chose to go “controversial” in her post, claiming that “monogamy isn’t natural, especially not for guys.”

Jamil’s struggle with cervical cancer, which some had accused her of faking, has also been validated by Blake. The musician expressed his displeasure at watching the woman he loves being abused on social media regularly. He emphasized that just because Jamil appears to be in good health doesn’t imply she isn’t suffering from a terrible illness like EDS. Blake has cited Jamil as an inspiration and collaborator on his albums.

The American presenter, who disclosed in 2020 that she attempted suicide after being singled out by British talk show host Piers Morgan, has defended Duchess Meghan. Morgan mocked the Duchess for admitting to having mental health concerns, saying: “I don’t believe a word she says, Meghan Markle, I wouldn’t believe it if she read me a weather report.”

Moreover, Jamil and viewers of “Good Morning Britain” and his co-host Alex Beresford chastised Morgan for his brutality and hubris. Morgan stormed off the set and left the show after six years as a result of this. Rumors circulated that the Duchess had befriended her and was “controlling” her after Jamil came out in her defense, which the actress denied. Jamil first met Meghan in 2019, when the Duchess of Sussex was featured in a guest-edited edition of Vogue.