Skip to content
Home » News » Courteney Cox Gives Fans A Surprise by playing ‘Friends’ Theme Song ‘I’ll Be There for You.’

Courteney Cox Gives Fans A Surprise by playing ‘Friends’ Theme Song ‘I’ll Be There for You.’ 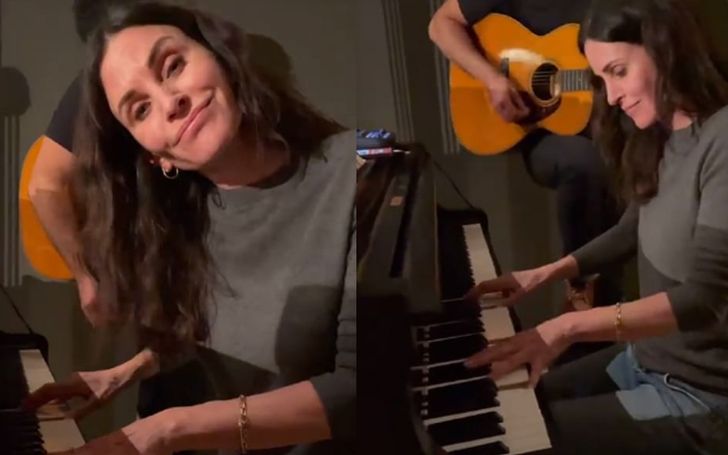 Courtney Cox shows off her piano skills by playing the ‘Friends’ theme song, I’ll be there for you for fans.

Is there anything that Courtney Cox can’t do? Her miss perfectionist role as Monica Geller in Friends isn’t something only for the screen but in real life as well. This Wednesday, she made every one of her fans nostalgic by playing the theme song I’ll Be There For You, The Rembrandts.

The actress posted an Instagram video where she looked to be playing the piano accompanied by singer Joel Taylor playing the guitar by her side. She even gave us the song’s signature handclaps before starting to play the tune.

The caption of her picture read, “How’d I do? Let me know what I should learn next below.” The response that followed was immediate, with fans and celebrities gushing over her performance. Law & Order: SVU star Mariska Hargitay was quick to write, “So awesome Court!” while Molly Shannon remarked, “this is just fantastic, you are adorable,” whereas David Beckham commented, “OMG OMG” with fire and heart-eye emojis.

You may also like: All To Know About Halsey’s Father Chris Frangipane

The 56-year-old‘s post has already gotten over 1.4 million likes and 31.6k comments, and it doesn’t look to be stopping anytime soon. Friends first hit the theatres almost three decades ago, and its craze is still going strong as ever.

Cox, along with the star cast, Jennifer Aniston, Lisa Kudrow, David Schwimmer, Matthew Perry, and Matt LeBlanc, are bringing the magic alive once again with their much-awaited Friends reunion on HBO Max. The project should’ve been released by now, but it was delayed amid the coronavirus case.