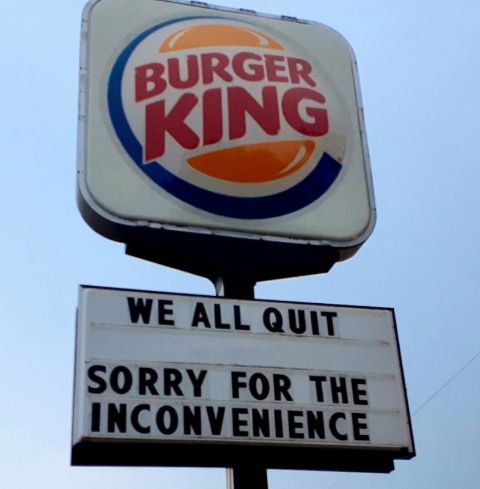 Since January, Rachael Flores, the general manager of Burger King in Lincoln, Nebraska, has posted this photo on her Facebook page. “WE ALL QUIT — SORRY FOR THE INCONVENIENCE,” reads the sign in front of the shop. The sign is on the corner of 59th and Havelock, and Saturday, the letters were removed.

According to KLKN Channel 8, the employees said they’ve been working in a kitchen without air conditioning for weeks, with temperatures reaching over 90 degrees at one point. The situation got so worse that one employee, a former general manager named Rachael Flores, was hospitalized for dehydration.

The general manager told KLKN, “I didn’t think anybody was going to notice the sign, because we did just one sign and then it went pretty crazy on Facebook.” She added, “I got a call from my upper management and they told me I needed to take it down.”

Burger King employees had been working in the kitchen without air conditioning for weeks, according to Flores. The temperature in the kitchen reached over 90 degrees at one point. Flores was taken to the hospital due to dehydration. Her boss allegedly reacted by calling her a “baby.”

Kylee Johnson, a former employee, said, “I just stayed to help Rachael out,” she added, “She’s my best friend. She’s been with me through a lot. I just want to help her as much as I can.” Kylee also said, “I knew what was going on staffing wise. We were just waiting for more people to come then and we got nobody.”

The two claimed that the kitchen was understaffed, with three to four people working at any given time during lunch. Flores stated that she worked between 50 and 60 hours per week. Flores and Johnson agreed that having such a small staff was risky.

According to the former employees, upper management had no idea the workers would put up the sign. The staff had been joking about putting the message up the day before and then went ahead and did it the next day. Flores’ boss fired her and told her to hand in her keys.

Although the Havelock location is open, Flores and Johnson claim that it is understaffed, with new employees leaving days after starting their shifts. They believe that similar events may occur in other locations.