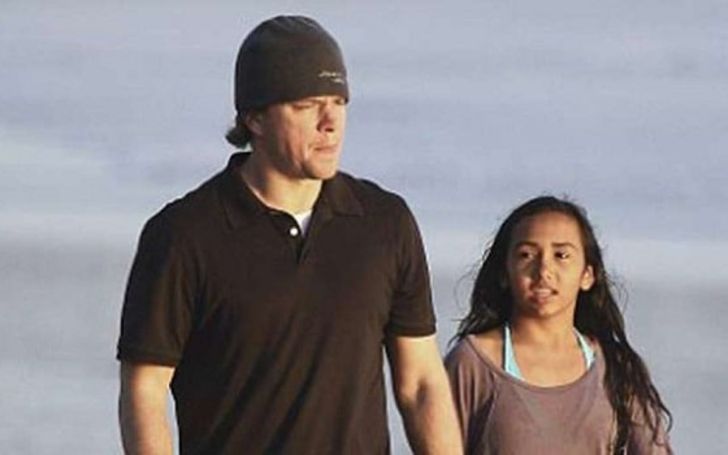 Learn all the details you need to know about Alexia Barroso, the oldest daughter of the renowned actor Matt Damon. We can talk all day about the successes and achievements of ‘Jason Bourne’ star Matt Damon. As one of the highest-grossing actors of all time, he’s enjoyed quite a remarkable acting career. A former student of Harvard University, Matt used his big brain well in the entertainment industry. And that has seen him bag numerous prestigious awards over the years, including an Academy Award and two Golden Globe Awards.

Apart from his enviable professional career, Matt Damon also leads a blissful personal life. Married to Luciana Bozán Barroso, his wife of over 14 years, ‘Good Will Hunting’ actor enjoys spending time with four children. His oldest daughter, Alexia Barroso, has been gaining a bit of attention lately. For those who want to learn about her life, we compiled some details in the sections below.

Matt Damon is a Stepfather to Alexia Barroso

Matt Damon is actually a stepfather to Alexia Barroso. She was born in 1999, from a previous marriage of Luciana Barroso. Luciana was married to Arbello Barroso before she tied the knot with Matt Damon.

Luciana and Arbello Barroso’s marriage did not last very long. They divorced just a few years after their wedding. After the divorce, Luciana had to relocate to the United States with Alexia, where they met Matt Damon. Following the marriage of Matt and Luciana, the ‘Saving Private Ryan’ actor adopted Alexia as his daughter, so she is also legally his own daughter.

Matt Damon showers his daughter Alexia with the same love as his three other biological daughters. In 2011, Matt showed his protective side as a dad as he said he was concerned about Alexia growing up.

‘Like any father, I’m concerned a little about her [Alexia] becoming a teenage,’ Matt Damon said in an interview with the Radio Times, as per Daily Mail. ‘Because I know just what teenage boys are thinking.

Also See: Find Out About the Age, Wiki, Net Worth, and Personal Life of Tony Campisi

Even Luciana Barroso’s ex-husband has a praise for Matt Damon’s love for his daughter. ‘I couldn’t possibly have asked for a better stepfather for my daughter than Matt,’ Arbello reportedly told Star in 2014. ‘He treats Alexia like she is his own flesh and blood. Matt has been an absolute blessing for my daughter.’

Matt Damon Met His Wife Luciana Barroso in a Bar

According to E Online, Matt Damon and Luciana Barroso met for the first time in April 2003, when she was working as a bartender at Crowbar in Miami. She was working there to support her and her daughter Alexia. And Matt was in town filming the comedy ‘Stuck On You.’

‘I literally saw her across a crowded room, literally,’ Matt Damon recalls the night he saw Luciana for the first time. ‘I don’t know how else our paths would’ve crossed if that didn’t happen. If all those things didn’t happen.’

Matt Damon and Luciana quickly connected after their first encounter. They soon began dating, and the two got engaged in September 2005. The couple married in a private civil ceremony on December 9, 2005, at the Manhattan Marriage Bureau.

Check Out: Learn about the Age, Wiki, Net Worth, Personal Life, and Other Details of Hailie Jade

In addition to Alexia, Matt and Luciana have three other daughters from their marriage. They are Isabella Damon, Stella Damon and Gia Zavala Damon. Those three children are Matt’s own biological daughters.