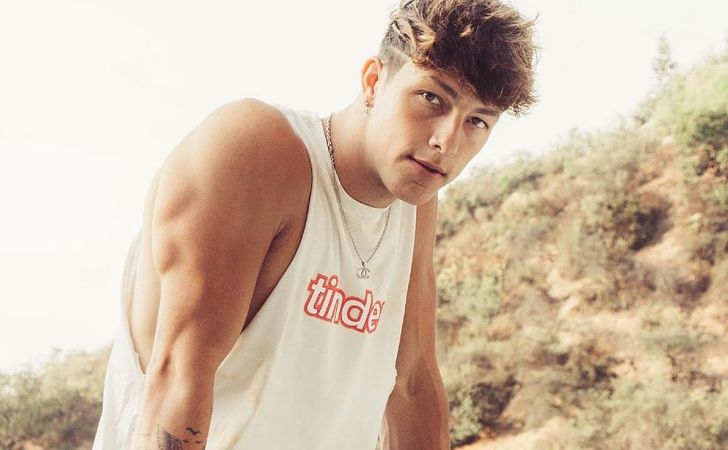 The digital world of the internet has presented an incredible opportunity for everyone, especially the millennials, to build a strong career out of it. Tayler Holder is someone who belongs to the same category as an inspiring actor and model. However, his orientation would feel incomplete without mentioning how the 23-year-old holds a strong reputation as an Instagram star with over 5 million followers. The talented artist isn’t just limited to modelling, as he recently released his second single called, ‘Fallback.’ Thanks to such a strong portfolio, this young Holder is living a dream life. As such, stay right here as we bring you all the details regarding the personal life, dating history, and net worth of the Tayler Holder.

Thanks to a strong presence on one of the world’s best social media site, Instagram, Tayler Holder is in a position that guarantees both fame and fortune to him. With over 5 million followers, the 23-year-old is undoubtedly an influencer. To top that off, he also looks to build a career as a singer, with two singles out already.

Without boring you much, we bring you the exciting numbers that Tayler Holder gathers a staggering net worth of $500,000 as of January 2021. Over time, his already impressive financial position is bound to grow as he is just in his early 20s and is yet to approach the peak of his career, be it as a model, influencer, or singer. Thanks to his enormous net worth, Tayler ensures to live a classy and luxurious life, doing all sorts of things that he always wanted.

You May Like: The Complete Breakdown of Greg Poehler’s Net Worth And Details About His Blissful Married Life.

As per online estimates and reports, a single post of Tayler Holder racks up an estimated earning of around $11,729 to $19,549. Interestingly, his presence in trending application TikTok is even more robust, with over 17 million followers. His income further grows through the platform as his posts hold the potential to earn in the range of $10,741 to $17,901. Judging by his handle, Holder loves hanging out with his friends and doing things he loves, such as going on horseriding or traveling to beautiful locations.

Los Angeles based management firm A3 Artists Agency looks after most of his contractual and financial agreements. Surprisingly, Tayler Holder loved racing and even competed in motocross from a shocking age of 3.

Right now, Tayler Holder stands in an extremely significant position in his both his professional and personal life. While his musical and modeling career is on a roll, he enjoys a romantic relationship with girlfriend Charly Jordan. In fact, his partner is a celebrity herself and a renowned model with over 3.6 million followers. Over the years, Tayler’s girlfriend worked alongside some reputed brands such as Pura Vida, Forever 21, and Revolve.

It hasn’t been long since the two started dating, as Tayler and Charly first went out in 2020. Despite a short period of seeing one another, the pair look perfect for each other in pictures that they share very often on their Instagram handle. Prior to getting in a relationship with Instagram star Holder, Jordan used to date, Robert Graham.

On the other hand, Tayler Holder also shared a past affair with fellow TikTok star Sommer Ray. The two saw each other from May 2020 to July 2020, as their relationship was widely admired by their fans across social media. Unfortunately, in the end, things got messy, and Ray ended up blocking Holder’s current girlfriend, Charly Jordan.

Recommended: Know All About The Multi-talented Actor And Musician – Tony Campisi.

Only time will tell how serious Tayler Holder and his girlfriend Charly Jordan are in their romantic relationship. However, we can only hope that the celebrity duo who look the best fit for each other remain together for the rest of their lives by getting married.

Also See: Who Is Michael Douglas? How Much Is His Net Worth?