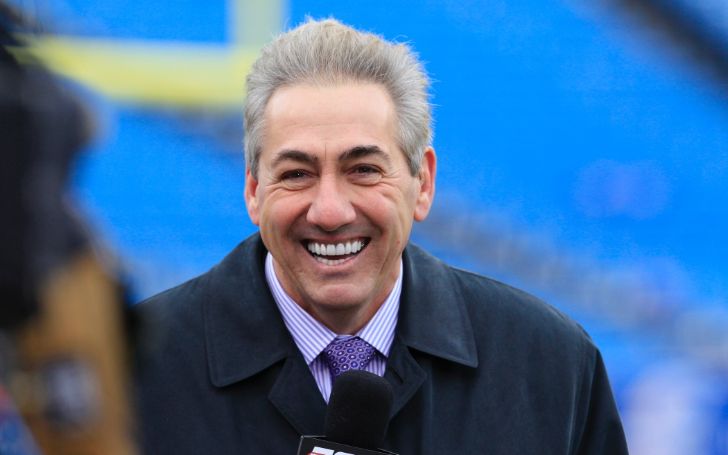 Salvatore Anthony Nicholas Paolantonio, aka Sal Paolantonio, is a well-known sports correspondent known for being one of the lead persons covering news for the ESPN. All through his career, he’s known for covering Sunday NFL Countdown, NFL Live, National Football League for SportsCenter, and Fantasy Football Now. Paolantonio has a history of working with ESPN for a whopping 25 years of his career. So, let’s get to know some details on him like net worth, career, and personal life.

Sal Paolantonio’s been a key member of ESPN’s NFL coverage since way back in 1995 and his expertise in the field is quite unmatched till now. In every match/season, he can be seen offering the team reports of the week and stadium sites mainly in NFL Sundays. You can also find the reporter hosting one of the longest-running X’s and O’s weekly show, NFL Matchup.

If there’s one thing that Sal is proud of, it’s his exceptionally strong career as he managed to succeed not only professionally but also financially. According to Celebrity Net Worth, the reporter’s made a handsome net worth for himself of $2 million as an American sports reporter based in ESPN.

You may also like: Find All About Stand Up Comedian Mike Armstrong

Apparently he makes a comfortable earning of around $150,000 yearly salary from the ESPN. The amount might differ in a couple of thousands due to tax compensation but that’s about it. Sal enjoys his net worth collection with his family and indulges in all sorts of modern luxuries that he deserves.

Did you know that the award-winning correspondent Sal Paolantonio was actually a political reporter before being a sports reporter? Prior to joining his decade long career in the ESPN, he worked with the Philadelphia Eagles beat reporter for The Philadelphia Inquirer for about two years.

In that period, the 64-year-old also served as a correspondent for the nightly news show WPHL-TV, Inquirer News Tonight along with hosting the Saturday Morning Sports Page on WIP sports radio. After that, he joined the ESPN Network and has been a veteran of 26 Super Bowls throughout his time there. He’s known to host the NFL Matchup since way back in 2004.

Besides Paolantonio’s career in journalism, he’s also interested in writing which is why he’s successfully published four books as of 2020. His most recent book was published in 2018, Philly Special: The Inside Story of How the Philadelphia Eagles Won Their First Super Bowl Championship. Some other of his books were How Football Explains America and The Last Big Man in Big City America.

Fans wondering about reporter Sal Paolantonio’s personal life should know that he is happily committed to his wife Lynn McGraw. The lovely pair married on February 24, 1979, after a long time of being romantically involved with each other.