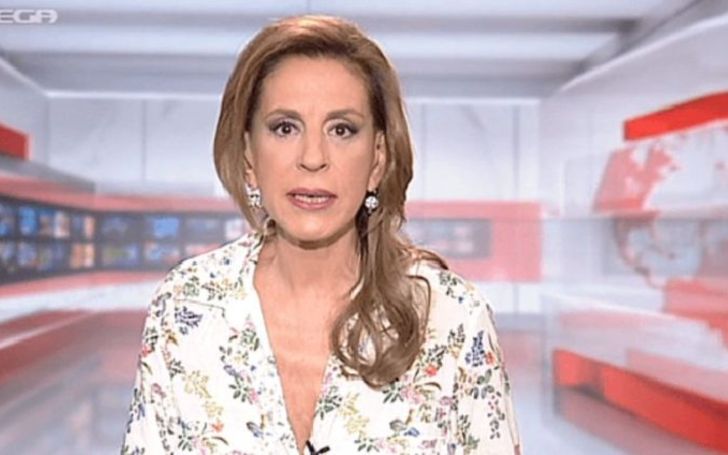 Being a journalist is not everybody’s piece of cake. The profession brings a significant amount of pressure and responsibility to provide accurate information to the mass public. Olga Tremi is someone who dedicated herself to the field as she is a reputed journalist and a news presenter. It was quite a shame that the diva decided to resign from ERT1 in April 2020. So, today we take you close to the personal life, net worth, and married life of Olga Tremi.

Olga Tremi’s Staggering Net Worth As A Journalist

The Greek Journalist followed her childhood dream to become a journalist, which helped her significantly to pay her bills. She started working in newspapers and gradually moved into television in 1975 and never looked back ever since. Thus, with over four decades in the industry, she made both fame and fortune. Specifically, Tremi amasses a whopping net worth of $1 million as of 2020. While the bank balance seems enormous, it isn’t a day’s work, as she spent many years burning the midnight oil.

According to estimates, Tremi made around $97,005 per year, which happens to be the average salary of a television presenter. Thanks to such a substantial income, she enjoys a lavishing lifestyle around modern amenities.

The career resume of Olga Tremi defines her as a journalist and an economist by profession. She started working for the newspaper Rizospastis in 1975 before switching to Eleftherotypia, To Vima, and Ethnos. Similarly, she made her first political show on Greek television in 1989 alongside Elli Stai. She also worked for several radio stations like Flash 96, ANT1 97.2 FM, and Athens 9.84, where she presented the noon magazine with all the latest happenings.

Tremi acquired experience in broadcast journalism when she presented news programs on ANT1, Star Channel, and Mega TV stations. Interestingly, she hosted several shows like ‘Last Word’ on ANT1 and ‘Veto’ on Mega. Similarly, she joined Mega Channel’s main news bulletin in 2005 until 2014 before making the big decision to resign. However, she did return on air for the network again on January 12, 2015.

Recommended: Get to know all about Cyntoia Brown Long, her murder conviction case and her married life.

Over the years, she moderated several political debates during the Greek and European elections in 2009 as the channel’s election night coordinator. Furthermore, she also presented a news program titled ’10’ on ERT1 from November 2019 to April 2020. As per the reports, fellow journalist Fanis Papathanassiou replaced her in the network.

While Olga Tremi’s professional life is totally resounding, she couldn’t replicate similar luck in her married life. In fact, in her first attempt, she tied the knot with newspaper director Theodore Kaloudis. However, they couldn’t sustain their relationship as they parted ways with a divorce shortly after. She tried her luck again by marrying Mega Channel’s news director Christos Panagiotopoulos. Together the love birds share a son named Alexandros. However, despite a family together, she couldn’t make things work with her second husband, which caused them to break up.

In an attempt to find love again, she met Nikos Nikiteas, a surgeon at the Second Surgical Clinic of the People’s Hospital and a associate professor. Luckily, she remains happy with her third husband and is still together with him.

Also See: Grab all the details about Giannis Pretenteris and his net worth.

Talking about the background of Olga Tremi, she was born in Athens on February 17, 1951. While she went to Hellenic French School in Ursuline for high school, she studied Economics at the School of Law, Political and Economic Sciences of EKPA. It was during her senior year when she started working for newspapers.