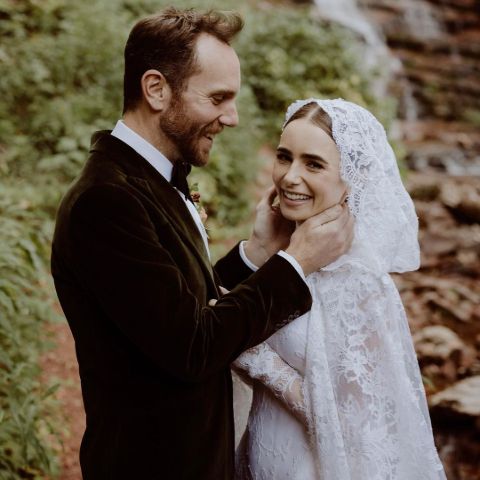 Lilly Collins, who starred in Emily in Paris, has revealed that she and director Charlie McDowell married over the holiday weekend, sharing some wonderful photographs from the special occasion on Instagram. Collins dressed in her white lace wedding gown, kissing her husband under a gorgeous natural scene in Dunton Hot Springs, Colorado.

The British-American actress wrote, “I’ve never wanted to be someone’s someone more than I do now that I’m your wife. We officially became each other’s forever on September 4th, 2021. I adore you [Charlie Mcdowell]… What began as a fairytale has become my permanent reality.”

Furthermore, Collins went on to talk about her big day in another post. The two kissed near to a waterfall, this time with her veil. “What began as a fairytale has become my permanent reality. I’ll never be able to really express how otherworldly this past weekend was, but magical is a fantastic starting point,” she said in another picture. Her new husband also shared a few photos from the event with his followers.

“I married the most generous, thoughtful, and beautiful person I’ve ever known,” he posted on Instagram before adding, I love you @lilyjcollins.” Several well-known friends and family members, including Reese Witherspoon, congratulated the happy couple on social media. “I’m so happy for you two! Many best wishes for a lovely marriage! “Under Collins’ message, the Legally Blonde actress wrote.

Sarah Hyland, Vanessa Hudgens, Jay Shetty, and Natalia Bryant are among the celebrities who have wished the couple well. Collins previously discussed her engagement to McDowell in October, raving over their upcoming roles in each other’s life. She told USA Today at the time, “I am absolutely utterly over the moon and very delighted.”

The Growing Pains star said, “I’m ecstatic to be his fiancée, and it’s been a fantastic experience I’ll never forget.” She continued, “I keep referring to it as this deep knowing sensation that I’m exactly where I’m supposed to be, with the person I’m supposed to be with, and feeling exactly how I’m supposed to feel.” Lily added, “It’s just that knowing feeling that takes over your whole body, and just being uncontrollably happy. My cheeks just kept hurting, and I feel very grateful.”