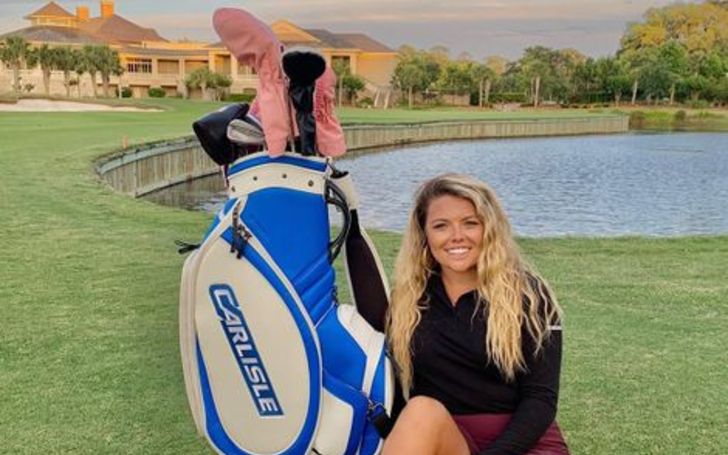 Sports is an integral area of entertainment in the world today. There are many sports, but one game that has been popular with people of all ages in America is golf. Lauren Stephenson is a promising young talent of the sports. Named one of the top amateur golfers in her college, she looks to have a bright future ahead but still got a lot to prove. Let’s take a quick look at how her private and professional life looks!

Is Golfer Lauren Stephenson’s In a Relationship? What is Her Marital Status?

As beautiful and talented Lauren Stephenson is, she looks to be singe right now. There has been no news of her dating anyone both in the past or present.

The female golfer has also never hinted about her romance with anyone on her social media. For now, it appears she is focused on her career rather than being in love.

Mostly, Lauren plays golf to hone her skills, but she also separates time to spend with her family. Moreover, she also enjoys going outdoors, usually shopping and traveling in her spare time. She frequently posts pictures and videos on her Instagram, Facebook, and Twitter accounts.

Lauren Stephenson’s Net Worth And Career

Despite only a year since she turned pro golfer, Lauren Stephenson has done an impressive job of accumulating a net worth of $150,000. So far, in her promising profession, she has earned total career earnings of $164,580. Not bad, huh?

Check out the clip of Lauren Stephenson giving an interview!

The 22-year-old finished her rookie season in the 10th position in the Louise Suggs Rolex Rookie of the Year Standings. She began her professional career in 2019 after securing her LPGA status for the 2019 season.

Lauren Stephenson was born in 1997 in Lexington, South Carolina, United States. Her parents are Charles Stephenson and Sara Stephenson. She has a sister Hannah Stephenson.

The 1.60 meters tall athlete attended Lexington High School. Later she started her college at Clemson University in 2015. As a junior in high school, she won the AJGA Junior Girls Championship.

In her amateur career, she was named the 2018 Golfweek Player of the Year and won the 2018 Golfstat Cup, the nation’s leading scorer with a school-record 69.76 average. Besides, she is a member of Fellow Christian Athletes (FCA).