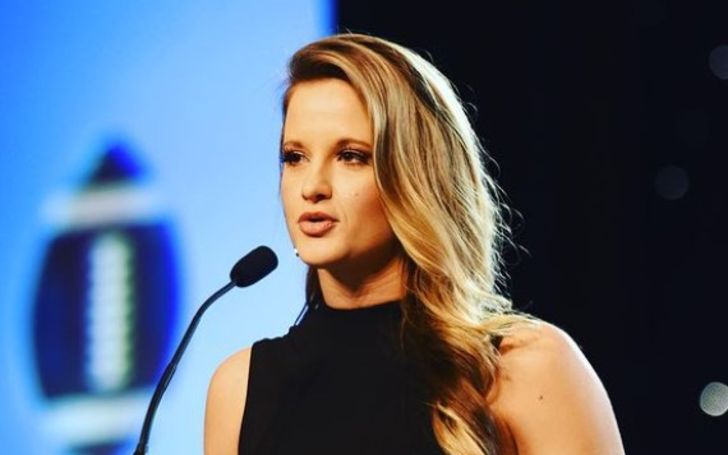 Kelsey Riggs rose to prominence in the broadcasting biz. Indeed, she found her peace as a journalist. Explicitly speaking, she’s a sportscaster who currently serves ACCN/ESPN. Until now, the 32 years old journalist has covered sports in three major cities and is paving her way to become one of the prominent faces of ACCN. With a booming career as a television personality, her social media accounts are also gaining an impressive amount of followers. Let’s learn more about her with this article.

When people become successful, many eager to learn how much they make from their blooming careers? The same goes for Kelsey Riggs, too; some people want to know how much she makes as a sportscaster.

Although many are searching for ways to get an insight on her earnings, unfortunately, nothing can be found until and unless Riggs herself disclose her financial information. However, despite the odds, some media outlets managed to estimate her net worth.

Sources claim Riggs holds an impressive net worth of $400 thousand as of now, and credits to her six-figure fortune go to her as a broadcaster. According to Indeed, on average, a sportscaster earns $38,456 per year.

Thus, if Riggs also makes something around those numbers, it’s natural for her to enjoy a net worth of $400 thousand after almost a decade of hardship.

Kelsey Riggs began her career in the broadcasting industry as a production assistant working at Charleston’s CBS affiliate, WCSC-TV. After working there for a year, in 2012, she started her journey as a reporter at Florence’s WBTW-TV.

The 32-year-old Riggs gave a year of her life to WBTW-TV, serving as a reporter and then another two, working as a sports anchor. She then left the broadcast in 2015 and then joined the local NBC affiliate, WCNC-TV. As per her LinkedIn profile, she worked there for almost four years.

As of now, Riggs is with ACCN/ESPN reporting and hosting the studio show during football games. She was appointed by the firm back in 2019.’

Is Kelsey Riggs Married? If Yes, Then Who’s Her Husband?

Talking about Kelsey Riggs’s love-life, she’s probably single. Therefore, she isn’t married yet. It seems she’s all focused on her professional life, which leaves no time for any romantic scene.

As per Earn The Necklace, Kelsey Riggs was born on November 19, 1988, to her parents Bryan and Pam. She’s a native of South Carolina who was raised alongside her siblings: two sisters, Breanne and Chandler Riggs.

Riggs’s young sister, Chandler, is a student at Clemson University, whereas her elder sister is happily married to Brain Benton.

Regarding Riggs’s education, she attended James Island Charter High School. Besides completing her education, there she also learned to play soccer. Subsequently, she went on to play soccer at Charleston Southern University.

As noted on Riggs’s Twitter bio, she tore her ACL while trying to relive her glory days playing for the Buccaneers. She passed the university with a bachelor’s degree in communication in 2011.