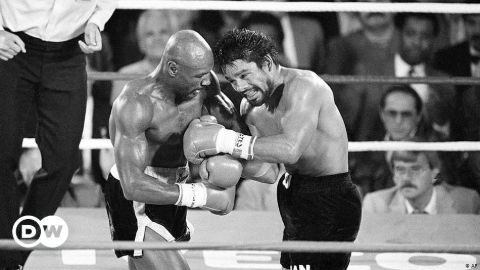 Former undisputed middleweight champion boxer Marvin Hagler passed away on Saturday at the age of 66.

US Boxing champion Marvelous Marvin Hagler has sadly passed away at the family home in Bartlett, New Hampshire, as proclaimed by his wife, Kay Guarrera. She revealed the news in the media through a post on her late husband’s Facebook fan page giving details about the incident.

The announcement read, “I am sorry to make a very sad announcement, Today unfortunately my beloved husband Marvelous Marvin passed away unexpectedly at his home here in New Hampshire. “She also added, “Our family requests that you respect our privacy during this difficult time. With love, Kay G. Hagler.”

Although the death’s cause wasn’t revealed, the news was later confirmed by promoter Bob Arum and Top Rank. Arum also paid his respects to the legendary boxer that read, “Marvelous Marvin Hagler was among the greatest athletes that Top Rank ever promoted. He was a man of honor and a man of his word, and he performed in the ring with unparalleled determination. He was a true athlete and a true man. I will miss him greatly.”

Hagler’s sudden death shocked the world and got a reaction from many fans as well as the celebrities from the boxing industry. Former fighter and legendary trainer Freddie Roach was also quick to share his past conversation with the late boxer and how he came to the coach’s hometown to watch one of his fights.

You may also like: Here’s all to know about Alejandro Monteverde, Net Worth, Wife and Career

Roach shared on his social media, “Marvin Hagler came to my fight in Boston, I appreciated what he said to me after my fight. Rest In Peace, my friend. Condolences to the Hagler family. Thank you Marvellous Marvin Hagler for all you gave to boxing.”

Marvin Nathaniel Hagler was born on May 23, 1954, and he reigned as undisputed champion from 1980 to 1987, gaining 12 successful defenses of the title.