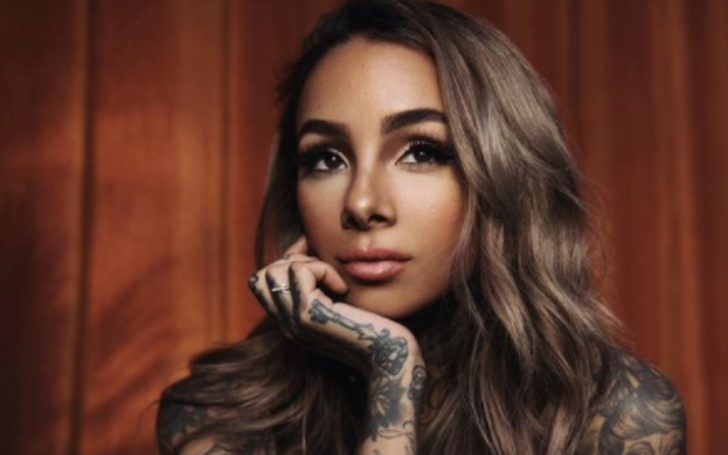 Cleo Wattenström’s been a famous figure in the media for two things, one being wedded to actor Joel Kinnaman and another being a fantastic tattoo artist. She shines with her dedication and talent through her Chicano style of art using only black and grey inks. You’d find it a surprise that she decided to explore her artistic side and become a professional tattooist at the age of 14. Just like that, you’ll find many exciting things about the lady from the read below.

Being a tattoo artist is not as easy as it sounds, but the hard work is worth everything when you get your paycheque. Cleo Wattenström enjoys a handsome sum of net worth for herself from her profession as a tattoo artist and as a model. Having worked in this industry for nearly a decade, she’s managed to establish herself as a known and trusted figure amongst her customers.

The 28-year-old operates her own tattoo parlor in California, USA. Even though she’s yet to share the exact details on her earnings, as of now, we can make a rough estimation for her. According to Zip Recruiter, a professional artist’s annual salary can be as high as $309,000 in the United States. The majority of artists typically earn from $39,000 to $106,500 to $260,000, depending on their popularity and demand.

You may also like: Tamara Taggart Net Worth Collection

Sources estimate Cleo’s net worth to be a staggering amount of $400,000 as of 2021. She enjoys a great deal from her tattoo projects, modeling assignments, and product endorsements in her Instagram handle. The model has a sumptuous 215k fan following on her page, where she frequently shares product details.

Cleo Wattenström grew up in Brussels for most of her life, but would often travel with her parents to new cities due to their profession. The family trips exposed her to a series of culture and arts of different places that eventually motivated her towards tattoos. At the age of 14, she took a bold decision and quit high school to pursue her passion.

The young girl soon started taking up part-time jobs to sustain herself and found herself with an apprentice job at a local tattoo salon. Along with that, she took up various modeling projects posing for genres like horror, goth, retro, pin-up, and many more that suited her look. After a couple of years in the business, she opened her private studio called Shanti Tattoo in Venice, California.

Wattenström has also partnered with Sullen Art Collective and launched a series of products inspired by her tattoo designs. She is currently busy with her new project called The DNA Project.

The relationship of Cleo Wattenström and actor Joel Kinnaman was pretty much a secret throughout their time together. The couple divorced as secretly as they met each other. They met each other around 2014 and successfully kept their personal life lowkey for a while before making a red carpet appearance together on the American actor’s movie Run The Night.

The glamorous couple ended up tying the knot soon after, but the media only got to know about it in 2016 through a talk show where Kinnaman confessed the truth. However, they’ve already parted ways in 2018, as per sources. The reason remains undisclosed, and they are still on good terms with each other.

For more news and updates about your favorite stars, kindly stay connected with us at Featured Biography.