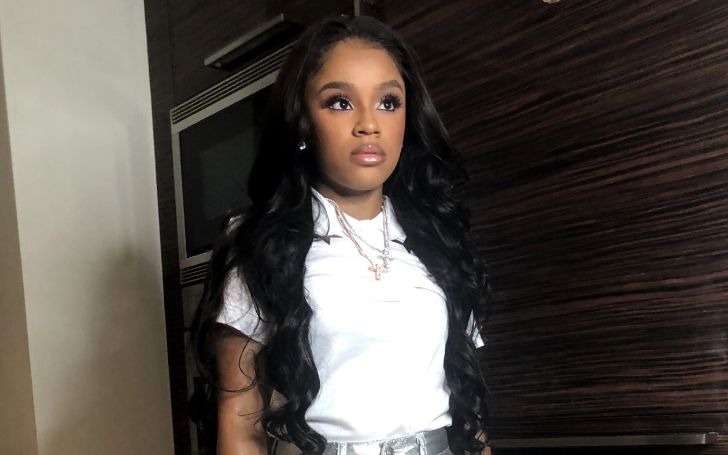 Iyanna Mayweather is widely recognized as one of the fourth children of boxing legend Floyd Mayweather Jr. Famous on social media, Iyanna broke headlines all over the internet while gifted 18 carats “Canary Pristine” ring worth $5 million on her 14th birthday.

Iyanna Mayweather and Youngboy have been dating since 2019. Indeed, the pair have a dysfunctional relationship which has been unstable as well as volatile from the beginning.

Mayweather is currently kindling romance with 21-year-old NBA YoungBoy who is father to seven children with several different women. The relationship has been shaky from the start because Mayweather allegedly slashed the tires on YoungBoy’s Maybach in 2019.

A year before, YoungBoy even made a disrespectful track about her which he titled Dirty Iyanna. Regardless of that, the lovebirds forgave themselves for their past mistakes followed by Mayweather’s Instagram post where she sang along to the lyrics of the song.

Do Iyanna have children with YoungBoy?

19-year-old Iyana Mayweather welcomed her first child with YoungBoy in January 2021. She confirmed the birth of her child uploading a picture of the baby’s foot on her Instagram story.

Nevertheless, Iyanna has not yet revealed the gender of her child, but The Shade Room reported it’s a boy. The curly black haired flaunts her baby bump amidst the summer of 2020 in an interview with Hollywood Unlocked. Also, Mr. Floyd assured his daughter was expecting a baby with YoungBoy.

Even though YoungBoy and Iyanna are happy, what Yaya tries not to do is get into her personal business. It is because once Iyanna is no longer under the rapper’s roof, then it’s between her and her significant other.

Boxing legend’s daughter Iyanna Mayweather grew up in the wealthy family background. She received a Mercedes 550 S-Class to go along with her G-Class class on her 14th birthday. Speaking of what Mayweather does for a living, she began her career as a social media star at teenage.

Iyanna uploads her stylish photos and videos on her social media handle. Not only that, she released a music video “Oh Okay Remix” in October 2018 on her self-titled YouTube channel. Iyanna’s rapping style and videos earned her mixed reviews and huge fan followers.

After joining a YouTube channel on June 20, 2018, she signed a partnership with FashionNova. To date, she frequently posts adverts of herself wearing the company’s clothing. Her net worth ranges from around $1 –$3 million.

Iyanna Mayweather was arrested in Houston and charged with felony aggravated assault with a deadly weapon in April 2020. Held at Harris County Jail, Mayweather was accused of stabbing LaPattra Lashai Jacobs, one of YoungBoy’s baby mama’s. He attacked twice after an argument. As per TMZ, Jacobs was rushed to a local hospital and her condition has not been discussed publicly.

TMZ reported, Jacobs sparked the fight by pulling her hair outside the house prior to the confrontation moved inside. Jacobs mentioned she was inside with YoungBoy when Iyanna arrived and turned aggressive after requested to leave the property.

Sources claim Jacob is the mother to one of YoungBoy’s four children when Mayweather identified she was once engaged to YoungBoy. Additionally, the rapper was shortly detained outside the home by police before being released.

Iyanna Mayweather was born on May 20, 2000, in Las Vegas, Nevada, United States. She is one of four children to boxing champion Floyd Mayweather Jr. Iyanna has spent time training with her dad. For being a celebrity kid, she is extremely popular on Instagram with over 1.3 million followers on “moneyyaya” (Instagram account). Iyanna’s three siblings are Zion, Koraun, and Jirah.